This is where I was at 5:45. Sitting in the sun watching batting practice. 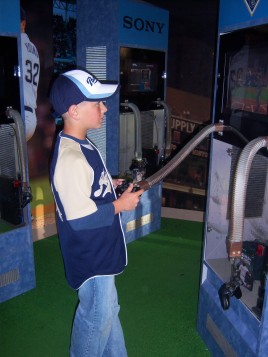 This is where Sportsboy was.

Prepping the field for the opening ceremonies. View from our seats. 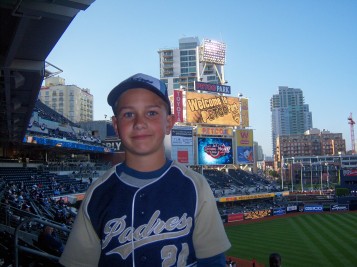 Traditional photo of Sportsboy with the scoreboard in the background on Opening Night.

The usual festive explosion of streamers after the players are introduced.

They honored all of the first responders who were there during the October fires and they were there to unfurl the traditional flag during the Star Spangled Banner. It’s so beautiful. Can you tell I took the picture during The Rockets Red Glare?

National League Cy Young Award Winner for 2007 – Jake Peavy. Thanks to his shutout pitching and his two RBI’s at the plate, the Padres won 4-0 to start the year off with a victory over the Houston Astros. The only bummer was that it was not a save situation so our future Hall of Fame closer did not make an appearance. Otherwise we had a wonderful time – ended up moving out of these seats around the 4th to meet up some friends, then moved again in the 5th to say hi to the family who got us the tickets for the game and ended up staying with them the rest of the way. Yeah, it was a school night and we were both a little slow getting up this morning as a result, but it was worth it.

The ballpark was built downtown with the notion that it would spur development around and has it ever! It opened in 2004 and just 4 years later, the amount of building is tremendous. Every restaurant/club/bar we passed before the game was spilled over with fans. There are at least 3 times the number of places to eat there now. Condos are everywhere. I glanced around during the opening ceremonies and spotted people on balconies watching all around. If you visit San Diego during the season, you have to go to a game. It’s just so much fun!