A couple of weeks ago one of the Dream Dinners that I made required some fajita beef to be slow cooked in a marianade (it was awesome). That reminded that,  hey – I have a crock pot! The December menu at DD didn’t turn me on and life is actually not so crazy at least until little league kicks in around March so I do actually have time to think about cooking dinner. So last week I ascended the mountain of wisdom and asked The Guru for help finding some crock pot recipes. (Translation: I asked the August Moms*) I was directed to a site called A Year of Crock Potting and I lifted this recipe for Pasta Fagioli. It fit my requirement of being kid palate friendly and fairly easy on the prep. However, there WAS a warning that I did not heed:

Use a 6 quart or larger crockpot, or cut the recipe in half. This makes a lot.

I have a 4qt crock pot (apparently, I really had no clue it is so old!) Here is how high the liquid went BEFORE I added the pasta: 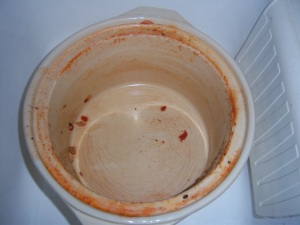 Yep, just about spilling over that final rim. I transferred the soup to a larger stovetop pot and added the noodles to reach the final product: 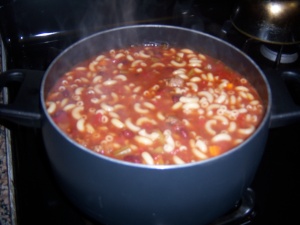 OK, so the verdict as agreed upon by both SportsBoy and me – the tomato flavor was too overpowering. My recommendation would be to NOT add the juices with the two cans of stewed tomatoes. If more liquid is needed, I think water would be fine.  Also, yeah, you need a 6 qt pot!! Another thing I would do is not add the ground beef until closer to the end. Having it in there that long made it pretty rubbery. IOW – it was good enough that we both ate all of our large bowls, and I would make it again, but only with those changes. It’s a good basic recipe that needs some help.

*The August Moms, purveyors of knowledge on all topics. Can answer all questions regarding the mysteries of life – particularly when pertaining to parenting and cooking. Everyone should have an August Mom group in their life.*

6 thoughts on “Pasta Fagioli (or why my crock pot WAS too small!)”