Joy. Pure joy. With a hint of sadness as my friend Jax is not here. Her mom passed a few weeks ago and then last night her dad had a heart attack. So the very public celebration of the day is a bit tempered for me personally.

Words? Well, for me it is the people who were there. I’ve picked out a few images from the web that speak to me. For me, this is the line from the speech that stood out:

As for our common defense, we reject as false the choice between our safety and our ideals.

It encapsulates the policy difference between the outgoing administration and President Obama’s (oh that felt good to type out!!)

I felt a moment of localized pride as I saw him escorted around with Speaker of the House Pelosi and Senator Feinstein. Two women from California. As someone twittered earlier, the crowd was filled with color as an endless throng of old white guys were introduced to be seated in the upper dais. That is, until they got to the current group. Then we saw some much better diversity.

There was a moment in this next picture that I thought Obama finally showed a smidge of nerves. He looked like he was trying very hard NOT to make eye contact with anyone as he composed himself. I had the feeling that if he did see someone he was going to break into a fit of nervous giggles 🙂 This was also when I was proud of those two California women! 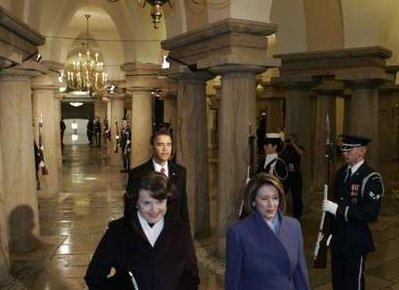 And please tell me that Cheney in the wheel chair did NOT look scarier than normal?? Do you Mr Potter from It’s A Wonderful Life in that image? Oh yeah. He was, arguably, the most powerful Vice President ever. Often referred to as Darth Cheney due to his scarier than thou demeanor. That he hurt his back lifting moving boxes yesterday? Yeah, gotta say that might have been karmic!

And then finally. The oath. Amusingly butchered by Chief Justice Roberts! And we thought Obama should be nervous, it didn’t occur to me that the Cheif Justice would have butterflies too.  But of course he did. It was the first time he was doing it too. That’s ok, it probably broke the tension for Obama.