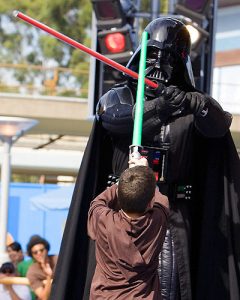 I realize that I am probably woefully behind the times in raving about this. Oh well. I haven’t been to Disneyland in probably 6 years or so. I had not had the luxury of going with adults only and spending a full day there in AGES. I had also NOT learned of the “get in free on your birthday in 2009” deal until, of course, AFTER my birthday (dammit!) So when a friend put out a call for people to go with her on her birthday this past Saturday, I jumped at the chance. Child-free weekend with no other commitments and I was thrilled! We got there when it opened, blew through several rides quite quickly (oooh, so yummy seeing Capt Jack Sparrow all over the Pirates ride!), got rained on, ate yummy junk and watched shows (Billy Hill! Who knew? I never saw that before and it was hysterical!), walked our legs off and shopped and just had a lovely time.

To me though, the *coolest* new thing I saw was the Jedi training show. All I could think of was how much FUN that would be! It’s a totally interactive show for younger ages kids (looked like onoe were over 10). And they had about 25-30 kids up there. The participants are given jedi robes and light sabers (oooooh). The very handsome asian Jedi Trainer patiently goes through some routine moves with the kids teaching them how to “activate!” and “de-activate!” their light sabers and then takes them through a series of fighting moves ending with “strike on the head!” I am pretty sure that is the move picture above 🙂 As you can see, after they go through this training, the Darth Vader music plays, storm troopers run on stage and then the whole back stage lifts up with ominous dry ice steam and a very full sized Darth Vader appears! I half expected the smaller of the kids to run away screaming, it was *that* realistic. But no, we watched two shows and not one kid ran or freaked. Then the kids take turns “fighting” with Darth vader! now, how flipping cool would that be? I swear those kids must remember that part of their day more than any other. They all had very intense “I will kill him!” looks on their faces and they clearly took the job of being a jedi very seriously. It was just adorable. I so wanted to do that myself!! I also wished that my boys could have had that fun when they were little. Sigh…born much too soon I suppose. But seriously, if you have a kid young enough to participate GO! Get that free birthday ticket and let him/her take a shot and striking Darth vader on the head! (which, given the height difference, actually turns out to be more like the groin) 🙂

5 thoughts on “I want to do Jedi Training!”