Yeah, I adapted the title from this classic Calvin & Hobbes collection: 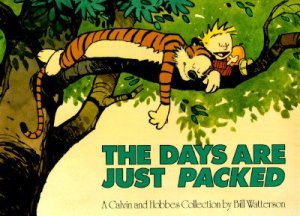 If  only the *image* was as appropriate as the words!!

After my 8am workout I went home and showered and then made a batch of Bisquik blueberry pancakes for SportsBoy and I to have for brunch. Since he is really *not* that close to the maximum weight for football and he had a noon game and I just remembered how much fun it is to have those as a weekend treat AND I knew we couldn’t pull it off on Sunday – there you go! Oh so yummy especially since blueberries have been so good at the store recently. I don’t want to hear anything about how horrible Bisquik might be for you – we don’t care. It’s a cooking/baking tool made in heaven in our opinion and no, I wont stop using it now that I have re-discovered it again!

So then we drove out to his game which was another good one for the team. They won 24-0. SB had an ‘ice cream saving’ tackle which means he ran down an opponent who had broken away into the open field and looked like he was going to score when he was run down by this lightening fast corner who had visions of Baskin Robbins dancing in his head (the reward they get with a shut out as you recall).  Sadly, I was denied yet *again* from my double scoop of Gold Medal Ribbon because coach decided it was too much of a hassle to find one where we were and too far for us to meet back at our home location so he called ‘rain check’ on the ice cream and promised to bring some to one of the practices this week. GRUMBLE! That’s 2 weeks in a row that I lost out (because, hey, it’s all about ME, right?) :->

Tthe boys reported back to me that the team we played against was the classiest they had played ever. I had noticed during the game that this team (which was pretty hard hitting and tackled quite well, they just couldn’t match our speed) would tackle and then help up the player they had knocked down and pat them on the shoulders or helmet nearly every time. Sportsboy said they all noticed it and started trying to remember to do the same back to them as the game progressed. So while I don’t normally ID teams in my blog posts I do want to give a shout out to the Vista Mighty Panthers for being a Class Act. Way to go coaches, parents and kids!

After the game we slipped by In N Out for double doubles as a salve to heal the no ice cream wounds. Then we cleaned up and I took SB over to his friends house for some R&R while I headed up to the local field for some board duties from 4-8.  We were back home and in bed by 9:30 because Sunday we were up at 6am!

If you even *consider* volunteering for one of your kid’s sports leagues – BE PREPARED. Most leagues do some combination Picture and Spirit Day as it is easiest to get the teams together for the photos and then have a nice fundraiser for the league. But let me tell you it is HARD WORK to plan and pull those off! At 6:30am SB and I were pulling up to another board members house to load our car with cases of water and silent auction items for the event. At 7:15am we arrived on the upper field at the high school where the party rental place was unloading tents and tables and chairs and dozens of volunteers were milling about awaiting instructions on where to go/what to do for set up. Looked like it was starting off fine – love to see so many folks out there to help. But then we noticed something rather ominous – the sprinklers were on in one corner of the field. Not impacting things at the moment – but – why were they on at all if we had the field reserved from 6am-6pm? Sure enough, the stopped in that section only to start up in a section even closer. Frantic calls to the custodian did nothing to stop the waterworks. Folks kept setting up. Those of us in charge felt a creeping sense of panic because we could visually calculate that the next section would be smack dab in the middle of everything – and….it WAS! WOOSH – waterworks all over the middle section raining down on everything that had been set up until that point. At this point you could really only laugh. We managed to contain the mud creating water in the center section and *thankfully* that was the last set to go off in our area. We diverted one obstacle course to a different section of the field and everything ended up just fine. SportsBoy was a huge help all day though I did give him breaks to play with his teammates. We were home and I was counting cash around 5pm – finishing at 6pm – FINALLY.  After dinner we were fighting sleep on the sofa as we watched the Sunday night football game and we were both upstairs in bed at 9pm.

Gosh it was nice to go to WORK today instead of a football field!!

One thought on “The weekends are just packed”