Friday after the first White House tour we traveled by metro to the Capitol & went to pick up the tickets for that tour (hence the photo outside of Congressman Joe Wilson’s office).  I just loved that anyone who could pass through a metal detector could just wander in the halls of the Congressional offices. There were staffers in all the offices and while the doors were mostly closed, they were unlocked and you didn’t need an appointment to be there. If I knew where my Congressman’s office was, I could have popped in to have a chat with his staff. Now *that’s* open government!

Think of it – everything in DC is free. It all belongs to US. Every museum & monument & government building we visited was free. THAT is pretty damn awesome.

So, the Capitol. A truly stunning building. 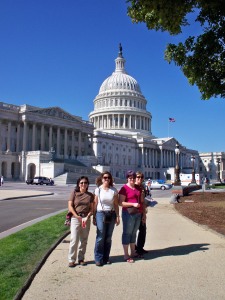 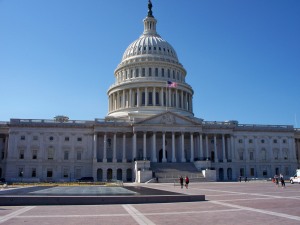 This is not the side where the oath is given, I was never up close to that, but I did see it from up in the Washington monument on Sunday (that post comes later).

We entered the Capitol in the newly opened visitors center which is pretty amazing all by itself.

Now, here I stupidly forgot I had a camera. I’m just a terrible picture taker & often feel it’s a burden more than fun. Once inside the center, I could have and should taken more photos, especially of the version of the Liberty Statue (which sits atop the dome) that they had in there. Also should have taken more while on the Capitol tour, but other than some inside dome shots below – nada. Sigh. So off to the web I go to fill in some blanks!

The Capitol tour was guided thank heavens. The inside of the dome was every bit as breath taking as you’ve heard. (These are my pics amazingly) 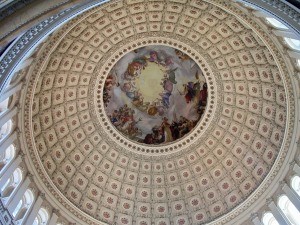 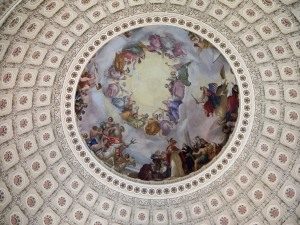 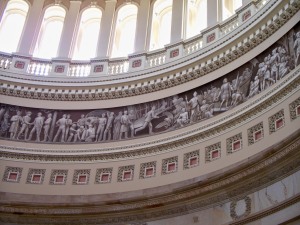 I really loved that painting I’ve focused on up there. Yes, it’s a painting, not a sculpture. See the man running kind of in the center? That’s the END of the painting. It starts up just to the right of that with the discovery of America. It then continues with scenes through history leading up to the Wright brothers flying their plane. Really cool.

Now to steal from the web again because I am a lame photographer:

I chose this one because you can see the base. You may need to click on this photo directly to open a larger version to really see the interesting part of this statue. Between the dark marble ledge and the lighter marble pedestal is about a 1 inch layer of broken bits of concrete. Why? “Mr Gorbachev, tear down that wall!” Yes, they are pieces of the original Berlin Wall which came down during his administration. Lovely touch.

Still only 5 of us, but when we made our way to the the restaurant for an early dinner that evening we met up with three more. We ate at Ten Penh

– a lovely high end Asian restaurant that offered a pre performance meal that included an appetizer, entree & dessert. Sadly, I again stunk as a photographer & took no photos of the food. I should have – it was yummy! I had Lumpia Spring Rolls, Grilled Beef Tenderloin (Bi Bim Bop), and Saigon Cinnamon Sugar Dusted donuts served with Dark Bittersweet Chocolate Pudding. Altogether now YUMMMMMMMMMMMMMM.

We raced from dinner to the Reagan Theatre of a performance of The Capitol Steps: 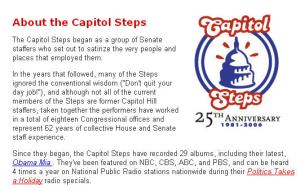 Go to that website right NOW and see if they will be *anywhere* near you. Then GO! Oh my gosh we laughed our cheeks off!! A couple of us literally laughed until we had a headache. Their satirical songs about current events in politics will slay you. They are so so darn spot on. The gal who played Hillary? Nailed it! But then so did all of their characters. Obama, Pelosi, Bush (W), Bill Clinton – all brilliant. One number wasn’t even using political characters – it was the Cher & Bob Dylan impersonations that had us falling out of our chairs.And Lirty Dies? Amazing!! Stunning! Tongue tying! Spoonerisms used to tell political tales. DIED laughing.

Anyway, enough telling you about, just trust me – all eight of us completely loved it. Just GO!

Despite being exhausted from the laughter, we still gathered in one hotel room and talked and laughed more into the night. Those conversations at the end of every day are the cherry on top of our reunions.

One thought on “Washington DC Trip Part 3 – The Capitol (Steps)”