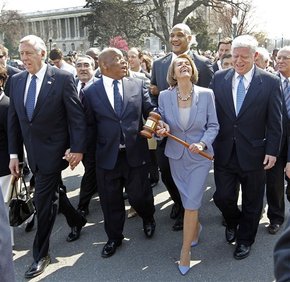 **Oops – the problem with having two blogs!! But since this already went out on Twitter from this site, I’ll leave it**

On Rachel Maddow’s show tonight they listed all of the items that will take effect within the next year in the Healthcare Reform bill which passed this weekend. I’ve emailed them to ask for a link to that or perhaps a PDF because that was a very good way to present the bill.  Update: Link from Maddow show producers: Factbox

Apparently those who have watched other media outlets this weekend other than CSPAN reported that they were finally going through a “what the bill means to you” kind of exercise.

Might have been nice for them to do that previously perhaps rather than just having talking heads spew talking points over each other heads all these months??

What do I know, I’m just an accountant with a blog 🙂

Anyhoo – on Rachel’s show it was estimated that the provision to extend dependent benefits to children up to the age of 26 will take effect around 9/23 given that Obama will sign the bill on 3/23. A 6 month lag time. Minor bummer there since my son turns 25 on July 14 BUT…still…more than we had hopes of him having anytime soon! If/when I hear back from the Maddow show I’ll post the list here. Also, there was this rather simplistic page which estimates the impact on you given your situation and income though the options are limited. Still, another practical tool:

So yes, I watched CSPAN all weekend. The most I’ve ever watched it! You know they had the best ratings ever given the historic nature of the events and that it did all come together on a weekend. I watched a lot of the Rules Committee meeting that went on for 13 hours – chaired by the 80 years YOUNG Rep Louise Slaughter who does not look at day over 70 and who still looked fresh and sounded sharp in that 13th hour and then the next day on the house floor. I’m telling you that even though my own 80 years young parents are in pretty damn good shape, Rep Slaughter was still damn impressive with her stamina and, well, yes, her patience in dealing with the tedium & ceremony of it all. I hope I have her energy at 80!!

I saw the protesters. Heard the reports of the ones with the bad behavior which was inexcusable. Saw twitter pics of some pretty darn nasty signs blended in with the otherwise sane ones. As one local posted on twitter, the tea party demonstrations were smaller this weekend, but a LOT more vocal and aggressive. He felt more frightened to be around them this time. Which was, I know, understandable since they were in desperation mode and this was democracy at its best. Well, perhaps in a few disgraceful cases, perhaps not at its best, but still, part of the process for sure. But I couldn’t help feeling that so much of that anger and fear on display was mis-guided. After all, they were revved up by the likes of Glenn Beck and a few of the more right wing fringe GOP congress folks such as Michelle Bachman. They weren’t at home finally seeing the cable & network news outlets showing point by point what the bill could mean to them. They were carrying the cries of “Socialism! Govt takeover! Armageddon!” and the likes. They were literally, somehow, convinced to their core that they were about to lose all semblance of freedom in their lives. I know because that’s what I heard one GOP congressman/woman on the floor of the house on Sunday as the role call of “debate” got rolling. “Taking away our freedoms” was an overarching theme.

But I couldn’t see it. I just could not see in anything I’d read or heard that convinced me that democracy would end with the passing of this bill.

Maybe because I look at it like my friend Lazy Buddhist who wrote her own personal story today on what this means to her: Why I’m so tickled health care reform passed. Notice that from her perspective, the passing of this bill provides her MORE freedom. MORE choice in what to do with her life.

The one huge thing I took away from the weekend glued to CSPAN is that the GOP could only argue from a point of anger. They argued about procedures and processes. They echoed (or lead) the tea party protesters chants to Kill the Bill and start over and then offered…….*crickets*……..Their voices were risen in abject opposition but without a single sense that they were truly empathetic that there IS a problem or that they have a different solution that will solve it just as well. Remember their plan as scored by the CBO would only have added 3 million people to the health care rolls. The plan which passed will cover over 30 million. HUGE difference.

And for each angry GOP protest on the floor, it was countered by a Democrat with a story about the people who will be helped. Some already well known thanks to President Obama reading their letters. Some who were relatives of the Representative. Some who were staffers of theirs. Some constituents. But the point was it felt like they were there for US. For people like my son and like Lazy Buddhist. And not just my son as I’ve learned about at least 5 other friends whose adult children will go back on their plans in September.

It’s lifting a burden off our shoulders. It’s making us feel MORE free, not less. It’s not perfect. But it’s also NOT a government takeover, or socialism by ANY stretch of the imagination. I ran the numbers on that Washington Post site and as Obama has promised from day one, it WONT change my coverage and it WONT raise my taxes.

Arm in arm, hand in hand, letting the people out side see that they were not going to be insulted & shouted down from what they knew to be, the right thing to do.

4 thoughts on “Healthcare Reform is personal, part 2 – an historic weekend”