Some days, the spam filter misses one or two and for some reason this morning’s slip up made me giggle – I mean, REALLY – why would you even respond to this one?

I guess I just don’t understand the allure of most spam messages. Do they even work? They must in order to justify their continued use, but it really boggles my mind.

Post of the week – Boys Boys Boys – because she’s right. And funny. Even if she did miss the burping as an Olympic Sport thing 😉 I’ll even forgive her for clearly spying in my own house.

Let’s take a ride in the way back machine to, well, sometime in the early 90s. DS1 was somewhere between 8-10 years old I think. He is nicknamed MusicMan because even as a baby he was very into music. I still clearly remember him singing along as a toddler to Peter Gabriel’s song Big Time whenever it would come on the radio in the car. Very cute huh? So as he’s older I got used to him absorbing whatever I had playing. Well this particular memory is as clear as if it happened yesterday. We (DS1, Ex2 (before DS2 was born) and I) were in my old Nissan 200sx driving east on Via De La Valle most likely heading east towards where my parent’s lived at that time. The cassette in the car (yeah, I said cassette – it was a 1986 model car!) was Belinda Carlisle and the song was Shades of Michelanglo. DS1 was singing along loud and clear. Particularly to this part of the lyrics:

In my mind, I’m thinking of things like this:

For some reason that I cannot remember, when the song was over I asked DS1 this question:

“Hey, do you know who Michelangelo is?” 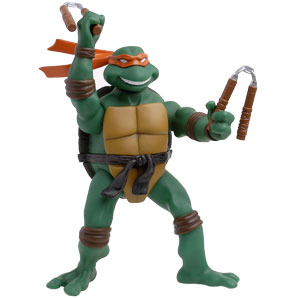 One thought on “Funny spam, post of the week & just who is Michaelangelo?”