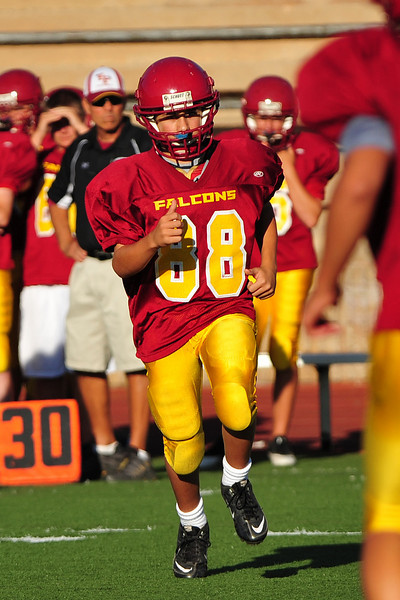 It’s been brought to my attention (ok, my mom bugged me) that I was remiss in writing up a game report last week. Oddly, given the result, I was somehow not terribly enthusiastic about it 😉 But, my write ups are needed for the continuing scrapbook she is keeping so I must keep up the tradition even after a trouncing.

But first – a few pictures from last week’s game courtesy of another parent who took some pretty snazzy photos. I snagged a few featuring our player of course:

So yes, they were crushed 48-0. Total opposite of the first week. We played against a private school from just up the road and they clearly had superior athletes & were a much more experienced team already. There were rumbles & rumors in the stands about recruiting & scholarships & the team having practiced together for a longer period in the summer (some of those rumors were confirmed later). Mostly though, I think the poor showing on our side came from an overuse of some players, a rookie coach and general lack of basic preparation. The boys were outplayed in every aspect. They couldn’t seem to tackle at all. At one point I swear the ball carrier cut through a crowd of at least 6 of our kids in a very small patch of the field. Sure, he made some minor jukes to get out of a tackle, but the effort from the defense was non existent. They stood & watched this kid and barely moved from their spots. No diving at his feet to trip him up, no reacting to his moves at all. Exasperating!! On offense they were so bland. Run run run. The VERY occasional pass was never thrown more than 10 yards out.

Now, this is the point when I should document that SB is frustrated. Yes, he was HONORED to be rewarded for his hard work in the summer with the starting wide receiver slot. His role is the same as he had when he played offense for his pop warner coach. Alternate with another WR bringing in the plays from the sideline to the huddle. After all, this isn’t the NFL with quarterbacks with speakers in their helmets & coaches calling plays in their ears 🙂 They gotta do things the old fashioned way. So it’s awesome that the coaches trusted him with this responsibility. However, they almost NEVER throw a single pass to the wide outs! They only run short pass plays to the running backs. It’s truly frustrating and in a game like last week’s when they were so obviously going to be blown out, it was even MORE frustrating. I was sitting in the stands (proof up above!) with the aforementioned pop warner coach & his mom. I tried to get Coach to tell me what he was seeing but he is too damn diplomatic. He would not critique the freshman coach! He did, quietly, say that he would set up the WR’s out more (widen them) and certainly throw to them in the second half. Why not? Chuck it & pray right? See if you can build up some confidence in your QB & WR’s. But no. Not only that, Coach noticed what I had not – that very few players were rotating between offense & defense. Way too many kids playing both ways which just further diminished their energy levels. With a roster of over 50 suited up, that was not terribly wise. SO the game dragged on and we seriously would have lost by 60 points if not for the opposing team having some self discipline issues of their own & getting penalized enough times to stop their own scoring drives. Sigh….flags, not tackles stopped them.

Before you think I’ve been too harsh on the coaches – the very next day the coach sent out an email admitting that he had not used enough kids & that he knew he needed to get back to the basics of tackling & blocking. He also made a commitment not to have kids play both ways unless there was an injury. Good.