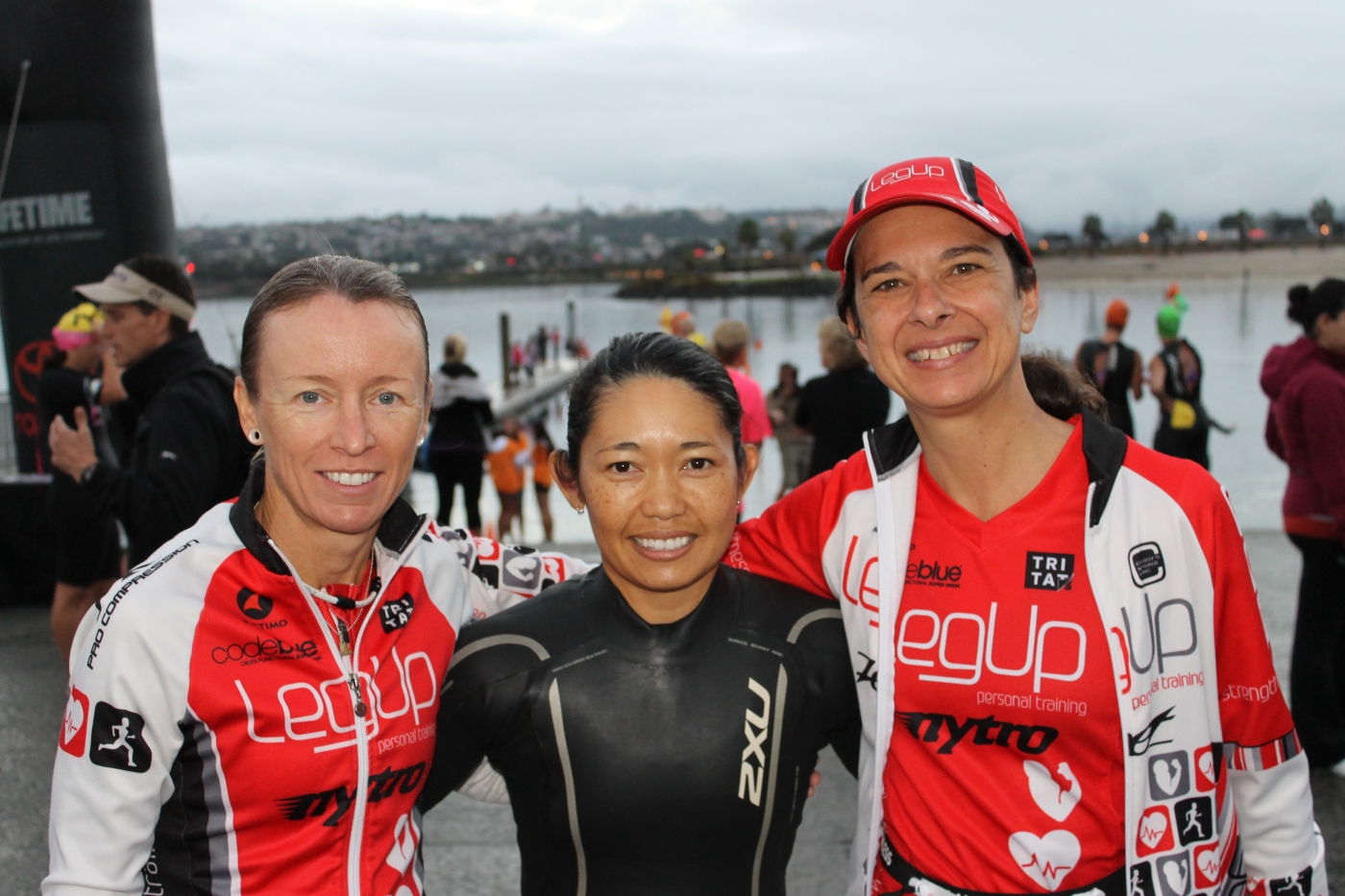 Weather conditions were just about perfect. Some heavy drizzle just before the start kept them from being the best possible. But the water was “warm” for the bay at 68 and the outside temps were the same and there was…….NO WIND!!! (oh thank you all the deities to be thanked!)

My personal condition was less than optimal  – let’s just say that approaching 48 means some hormonal issues that got a wee bit scary just 48 hours before the race. I had no idea how they would impact my speed/endurance. If we had raced last weekend when I did that 8 mile run? Slammin’ for sure. Today? I had no idea. Though I did feel better when I got to the course and when things got started so mentally I was thinking maybe it wouldn’t be too bad.

Our photographer was 16 and I think he did a pretty damn good job!

We had some friendly – and we found out, studly – competition in the event because our other usual LegUp team racer was inspired by our race entry to throw together a team of bad ass athletes from her work. Their swimmer? We think she was the second person out of the water. I mean – it was stupid fast how quickly she ran into transition! Right there I knew we were toast because even though we both had our Renee’s riding bikes and I knew that our Renee could make up a lot of ground and that Eve is a lot faster swimmer than she thinks – there was NO WAY I could keep up with their runner who normally does half marathons.

And yet – like I said, Eve as gotten fast what with all the training she has done all year with Renee preparing for R’s half Ironman next weekend so it was with some surprise, though not a ton, that I spotted her coming up the ramp about 4-5 minutes after our local competition. With a relay, all you have to do is get to the designated spot (where your bike rack is) and take the timing chip strap off one ankle and put it on the other. Because of that, 16 didn’t have the chance to get into a good position to see Renee bike out other than this shot as she left transition:

Given that the results of the relay event ended up being pretty damn tight, I will now point out that we did everything as instructed and broke no official race rules – a couple of teams ahead of us may not have been quite so clean. On the other hand, the race officials also didn’t care that my teammates ran along with me at the end which I have no doubt kept us up near the top so….whatever.

The focus of a champion. Renee is going to crush it in Austin next weekend, I just know it. Thanks to her smoking bike ride, she closed the gap to about a minute between us and our friend’s team. Then it hit me – oh shit! It’s my turn!! I got that timing chip and sprinted out the ramp like a crazy woman!

At this point I was thinking “Ok, slow it down Speed Racer, on your best day you can’t keep running like this!” and just about then Eve and Renee caught up to me to escort me on my run. I am so so so glad they did!

This photo was at the half way-ish point at the end of the first loop of the course. I had no watch or Runkeeper app with me to see how fast I was going which I thought was best. The pressure of seeing the other runner we knew up in front was enough and I really wanted to have something in the tank to sprint across the finish. I really wish we had identified the other relay runners because if I had known who else I had to pick off (or that there even were two more teams between our friend’s and ours) I think I could have *maybe* had a few more bursts of energy? Or, maybe not. Even with that smile, I was struggling and I could feel it. What I didn’t know was if I was struggling because I was going fast, or if it was due to my overall health.

I had started to gasp quite a bit on the return leg of the course. Somewhere around mile 2 Renee had said “We’re running a 9:30 pace” Dang! Ok, no wonder I was gasping! She was great though! While Eve was team cheerleader encouraging me all along, Renee started saying little one sentence pieces of advice “Chest up” “C’mon, let’s pick off this girl.” “Back straight. Lean from your ankles and let gravity do the work” Every time she said something my brain tried to register and take the advice and it would get me through the next 10 yards. Meanwhile I realized I was matching her cadence which I know she had slow down a lot but still I knew if I could keep turning my feet over with her then I could keep going.

As the parking lot came into view the final time Renee told me to run it out if I could. We found another runner to pick off which felt good and then I saw Eve reaching back with her hand and I saw the finish and I just said “Oh hell no, I am not stumbling in – I’m sprinting!” and I took off. Now that I’ve seen the results, I am mad because there was a team that finished 1 second in front of us!!! Argh!! But I honestly didn’t see another runner in front of me at the finish chute – not that I would – at that point I had kind of lost focus with my vision and was pretty sure I was either going to pass out or barf (or both!)

As it is, I mimicked 16 from the last race he ran on this course and just veered off to the right and immediately started to feel the wave of nausea overcome me. Thankfully it was just some dry heaves so I didn’t actually paint any pavement as he did, but oh my goodness did I totally KNOW I had left it ALL out there today! They kept wanting to hand me my medal and then a towel (that was a blessing because I could wipe my rapidly filling up eyes) and then take off the timing chip and then get a picture and….!!!

I finally recovered enough for 16 to take this shot of the two friendly teams:

They finished 1:52 ahead of us and ended up with 3rd place. We got 6th (like I said, had no idea there were two teams in between us!) out of 18 teams so I feel pretty OK with that.

Once we finally got our results – we had ALL set personal records for the event that we did!

That’s more than 2 minutes faster than my first race on the same course a year ago.