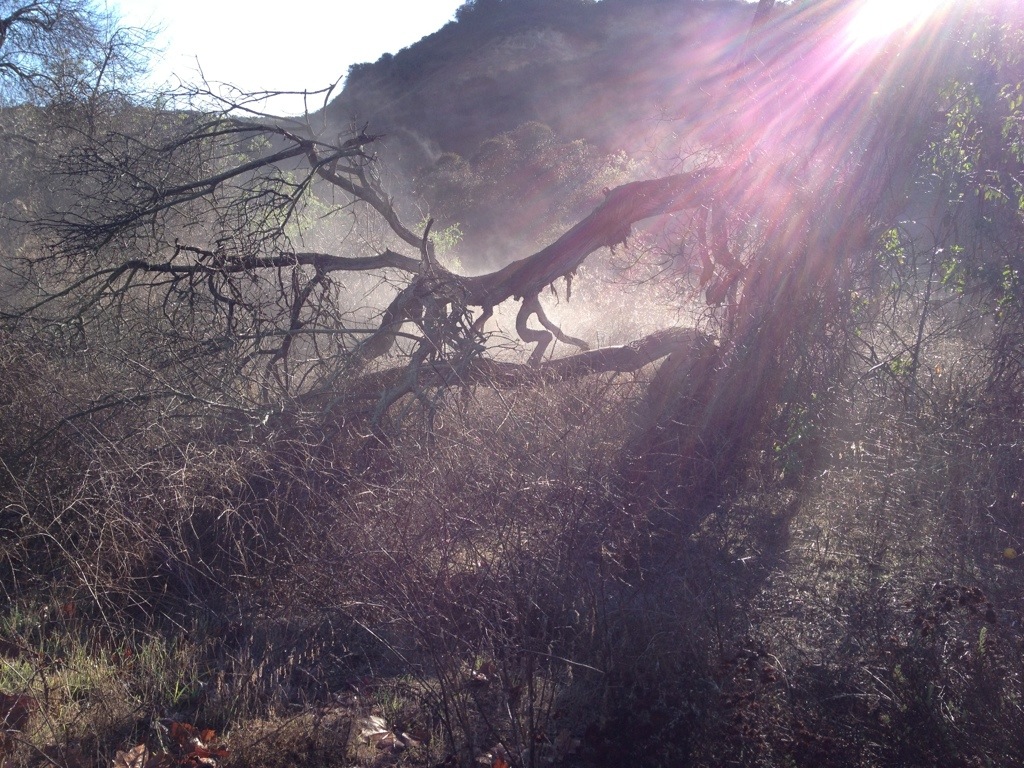 December 30th was a day of off and on showers so I had to take a break from staining. I did take the time for a typical longer Sunday morning trail run. Couldn’t join Renee in her 105 minute run at Lake Hodges, but I did throw my new Camelback on for a trial outing and go for an easy 5 mile jog over 60 minutes. It was around 48 when I started running and I just had to stop now and then to admire the misty landscape.

I finished taking down all of the backyard lights in between showers and hatched an aggressive plan of action for NYE.

I really wanted today to be a full time sofa day. No guilt. I mean, I do love tackling home improvement and organizing and cooking projects, but having been consumed with all of the above since Christmas, I thought the last day of my holiday break could perhaps be a restful one! Thankfully I got both boys to sign on to that plan and by the time 16 and I left for our respective NYE destinations, all tasks were completed.

Even though I only had two final sections to stain, they took a long time! This photo was taken in deep afternoon shadows. I had started at 9am! I did have to take breaks to direct light removal and match up light strands to boxes, but still. For whatever reason, it was slow going.

I figured I had just enough daylight – and then time after to clean myself up before NYE dinner – and I did have plenty of stain left, so I tackled the truly rotted and worn looking planter. Yeah, the wood is still in terrible shape, but damn, does it ever LOOK good now:

I may not put the potted plants back up on it now – I don’t want to cover it up!

So, yes, I did let 16 drive over to his friend’s house last night. I’d cleared it with the parents that he could stay there.

The plan was for me to have dinner with E&R and I had gotten up early and mixed up some jello shots to set all day while I painted. A mixture of black cherry jello flavor and brandy.

Anyhow – with my plan enacted I am today planted in front of the TV watching the Rose Parade and then whatever College Bowl game holds my interest. I don’t make traditional New Year’s Resolutions, but since my goal for 1/1/13 was to line up a full day of couch potato time – then I’ve already conquered the one resolution I did make!