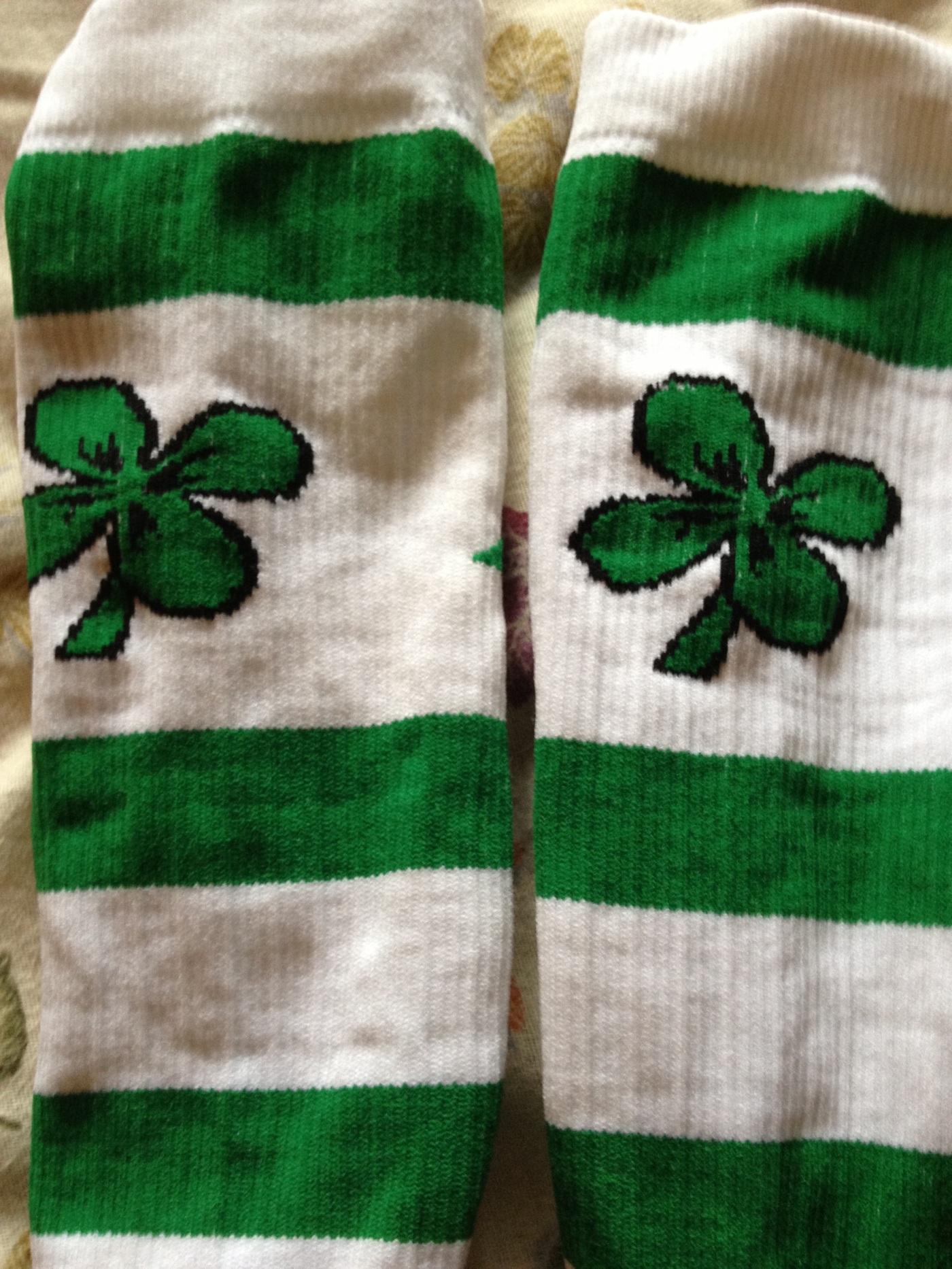 Aren’t those awesome socks? Pro Compression and yes, I wore them for the run today. Had to, right?

A two hour “easy” run was the plan.  We thought we would do some exploring. We’ve been eyeing the Santa Fe Valley trail which is the west end of the Lake Hodges Trail we took last week. They do connect at the dam so conceivably if I can properly find the western end of this and start there, you could run all the way from Rancho Santa Fe to the 15 freeway. That’s a long one though! Anyway, today we parked at a spot in between and ran west first, then back east to the dam, then back to the car. a shade under 9 miles. The western part revealed this gorgeous spot:

The bridge up above was further east and brought us ti the other side of the river so that when you get to the dam you are on the “road” side just under Del Dios Highway. As we were running back, we encountered a mini St Paddy’s Day parade of horses and riders all decked out properly in green:

It was a fabulous run that I think we will be doing again.

Meanwhile, the reason I’ve been absent from writing in here this week was the knee surgery, the freelance writing and yet more football meetings. Writing is going well. Sold another post this week and I have 7 in line for next week. Finally did get one rejected but it doesn’t bother me because I figured out that the vendor in question does that a lot randomly and with no real reason. I hadn’t noticed the “posted” and “rejected” tabs on a customer page before and one I looked into theirs I saw they had rejected as many as they had posted. Eh. The site stated that no matter how well you write, everyone has about a 10% reject rate so that is to be expected. I’ve written 14 so I was bound to lose one.

OK, so knee surgery – it went VERY well. This was the patient on Tuesday after coming home. He is hooked up to a Cold Therapy Unit that mixes ice and water and runs it up tubes to a pad strapped to his knee keeping a constant flow of nearly ice cold water surrounding the area. 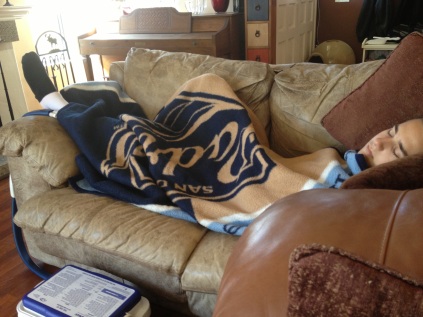 So as not to freak out anyone with a squeamish tummy, the next two photos (which I happen to think are not that bad) will be below the fold. They are of a knee freshly unwrapped from the dressing so there’s an incision spot and some very slight swelling showing. Then there’s what they found while they were in there – some very irritated Plica tissue which is soft tissue on the inside of the knee cap that had become fibrous and stiff preventing the knee cap from moving smoothly. It was HUGE relief to everyone that this was found! It meant not having to do a Lateral Release which takes longer to heal and was not a 100% cure. By finding something concrete to fix, that was right in the spot where he always had the pain (and was starting to feel the grinding), the little bit of scraping they had to do to clean out that tissue was much less intrusive and is probably why his swelling is NOT all that bad. So click on the “Continue Reading” link to see the pics. 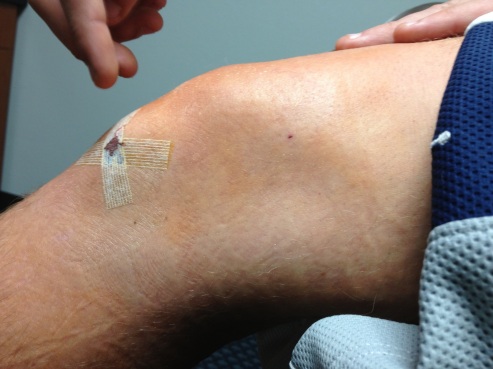 Barely swollen at all. Though now that he is up and moving around more, he says he does feel the excess fluid build up “sloshing” around a bit every time he stands up!

And there’s the offending mound of Plica tissue. Remember that this is an arthroscopic camera in his knee so that’s really about the size of a finger tip. Crazy to think that’s what has been bugging him all these years! Just as with the termites and the fibroids, that irritated Plica tissue has been properly evicted. We are hard core around here 🙂