Yes, that is a tad overly dramatic but…..

Flashback to 2 years ago and there was a horrendous rainy, cold windy JV game at the home field when 17 wore #88 and his team was getting pushed around rather liberally and players were dropping like flies after questionably legal/illegal hits, That included one on him after he *finally* had a pass thrown to him after a season of no plays to him at all and sure enough WHAMMO, he was hit by a large linebacker right on his ribcage and ended up leaving the field in an ambulance since there was fear of a cracked rib. Thankfully, it was ONLY a bruised chest wall, but I think all family members and most friends on the field that day would say – it was quite the scary event.

He obviously had it seared into his memory too because once we discussed the upcoming Poway game, he brought up that he would just like to be able walk off the field on his own 🙂

The weather was perfect football weather – crisp and clear and just chilly enough to remind you it IS Fall. We were playing at their field (which helped a lot to forget the past) and then it turned out that two years later it was his team that had the upper hand. 35-21 was the final score though it is deceiving since they were up 28-0 and 35-7 and the second tier units for both teams were playing most of the 4th quarter.

17 played heavily on offense again with a nice pancake block on the very first play and then a lightening quick pass to him when he was left UNCOVERED again! This time he ran for 15 yards and a first down after making the catch.

As he put it after the game “Am I really SO F****ing short that they cannot SEE ME?!”

At any rate, the team is now 4-2 which is sort of unexpected, but of course is a lot of fun for us.

Oh, and he was named Scout Team Player of the Week for the last two games (Mt Carmel & Vista). 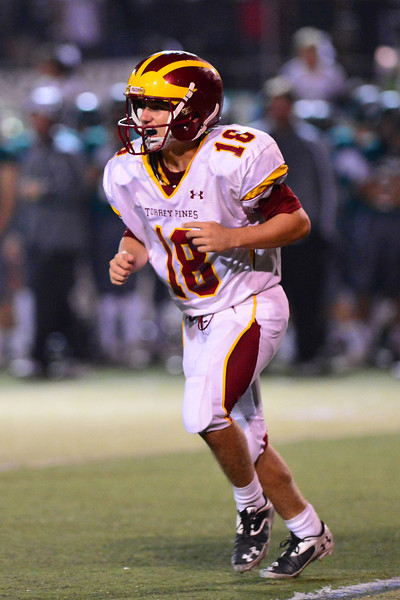