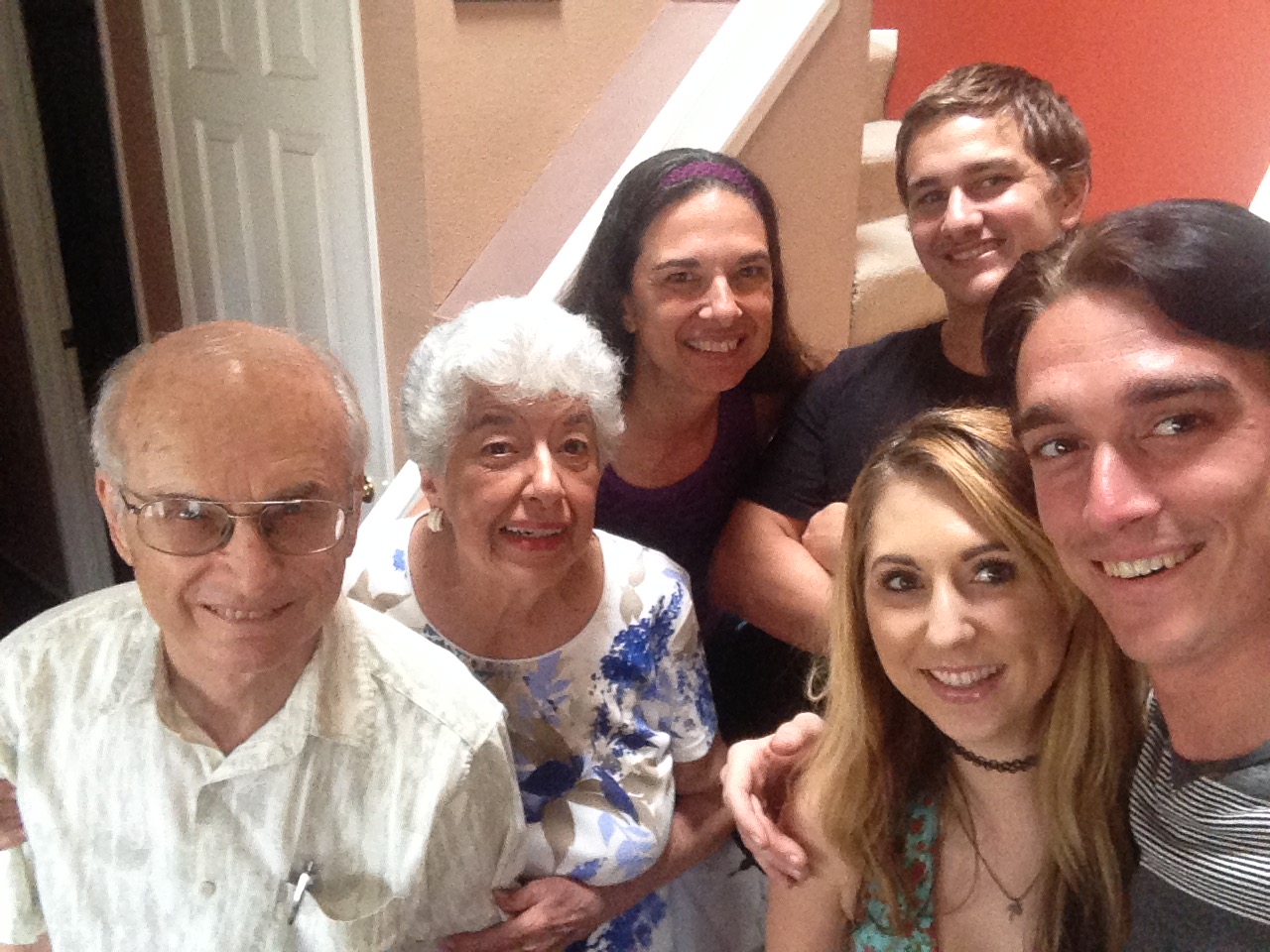 Longtime readers have probably seen most of the faces in this photo. This was the last time we were all together in one place at the end of 2015. The new face in the photo is Chelsea, my oldest son’s fiance (we love her!).

Alex is off in New Mexico starting his adult life on his own these days.

This tale is about my dad. One of the other ways I will be using this site (besides talking about Project Athena adventures and spirituality and such) will be to document what has become it’s own sort of adventure on the cutting edge of medicine.

Around the time this photo was taken, we already knew something was up with my dad’s memory. When we think back really deeply on it, I think we all noticed something for sure around 2013. That fall, as Alex was starting his senior year of football, my dad got lost driving home from one of the away games. We all attributed it to typical age related problems…but it got worse from there. After the getting lost incident, I had Nick become a chauffeur for them for the rest of the away games. They were fine going to the home games because that was super familiar. From then there were lots of little signs. Having trouble “getting his mind in gear” as he called it. Complex directions on the computer were impossible. Following a map to a new place required both directions TO and FROM.

Right – his orientation was deteriorating.

In the spring of 2015, my mom fell thanks to a garden hose bursting in her hands and broke the top of her leg bone and her wrist. That was a month long process of surgery and living in a rehab facility that opened MY eyes to just how quickly things had fallen off. He was able to drive on his own to visit her every day without issue, but sitting in the rehab facility with him for hours at a time revealed just how often he asked the same questions. Short term memory was going next 😦

Selfishly, we still didn’t have him seen for a diagnosis because my mom wasn’t able to drive on her own until her wrist was better. As it happens in early 2015 a car in their mobile home park had careened into the back of my dad’s car totaling it. So they were down to one car which meant that my mom would be almost always be riding WITH him when drove and by then they were mostly only driving to local, familiar places.

Plus, I had discovered a potential benefit program from the VA that would provide home care assistance IF we had a diagnosis. In my mind, that would help ease the burden off my mom.

Medicare being what it is, referrals and all that – it took until February of this year to get the official word: Alzheimer’s. Not that we didn’t KNOW, but hearing it was still a blow.

What to do? Well the pharmaceutical options such as Aricept had barely a 30% success rate of slowing down the progression of the disease and two arm loads of potential side effects. Given that my dad is otherwise physically healthy and emotionally happy (seriously, if anything he has become more present and immediately aware of his surroundings and is amazingly kind and helpful), we didn’t want to rock that boat for such low odds.

And really, all the drug does is mask the issue/maybe slow it down, but it doesn’t reverse anything. “Temporarily improves symptoms” is the standard summary.

So, we went back to our roots. My mom has always been much more trustful of holistic or alternative forms of medical treatment. One friend told me about a Dr Fife and his book on Coconut Oil as a treatment. Another friend pointed me to a video series called Awakening From Alzheimer’s. I ordered both.

The book resonated with me and I passed it on to my mom and she started making small adjustments to their diet and giving him the oil. I started putting it in my one cup of coffee every morning because hey…I have always taken after my dad in relation to my health so I figured I better start preventing NOW.

The video series was super enlightening and one of the doctors interview was from UCLA. That triggered a memory I had of seeing a news alert pop up on my phone some time ago about a breakthrough study in treating Alzheimer’s. His name floated around in my head: Dale Bredesen. I asked to join the Facebook group formed around the video series.

And then I forgot about it as you do….it was near to the Harbor To Harbor event and we were more focused on getting the VA benefits started so other than doing the oil thing we kind of trailed off with researching.

Right after H2H, I was at my mastermind group’s live event and Dr Tom O’Bryan was speaking there on the last day. Who does he mention in his talk about genetic weaknesses and dietary /environmental causes to disease? Dale Bredesen. And he quoted some stats: 88% of patients showed extended improvement. EXTENDED.

I literally started crying. I felt like someone had hit me in the chest and opened up this world of…HOPE.

I spoke with him after and he said “There are doctors using the Bredesen protocol, you don’t have to go to UCLA.” (though of course I would have!) He told me to call his office in the morning for a list.

The next morning I was added to the Facebook Group for Awakening from Alzheimer’s. Seriously…it was at least 2-3 weeks after getting the videos and transcripts. I go in there and the FIRST post I see is a woman from Texas telling everyone that she was bringing her husband to San Diego to see a doctor using the Bredesen Protocol! WHAT?! 6am I’m in my bathroom with chills going through my body…what are the chances of this? I respond to her with “Who is it?!” And I get a name – Dr. Youngberg. He’s in Temecula. Right, that place we drove to every year 3-4 times when Alex played Pop Warner. 45 minutes away from my parent’s house. I call. We get in to see him just 3 weeks after I learn of his name. We are IN! (I was sure it would take months to get in to see him…and in fact, very shortly it might be that long, but our timing was…impeccable).

Part 2 coming up another day.

Meanwhile you should pre-order Dr Bredesen’s book because our minds are already blown away by the findings – it comes out August 22.

The End of Alzheimer’s