Because I am head over heels right now with Harvey Milk: 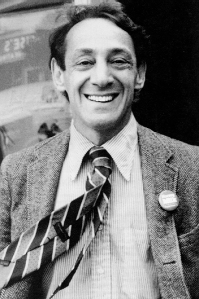 Ok, well to be honest about the new love of my life, this is the version I fell for tonight: 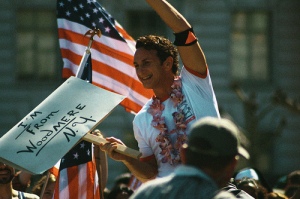 (Clearly anyone who has read my site before knows how I feel about gay rights. This movie was not putting me out of my comfort zone in the least. But I sure do HOPE that some minds be stretched by it. One man walked out at the beginning. Otherwise the half full theatre never moved)

I was only 13 when he died. I have…a very vague memory of hearing the news of the shooting. I *know* that I had zero knowledge that he was gay, or his significance in the political arena. Yes, this movie is a dramatic representation of his years in California leading up to his assasination. But if it is even 50% accurate then this was man was so amazingly heroic. The fact that he made those tape recordings to document his activism in the event he was killed…he knew. And he kept on fighting. Given how long it takes to make and release a movie, there is no way they knew how appropos the timing of it’s release would be.

The passage of Prop 8 in California has put gay rights back on the map nationally. I’ve documented that a bit already and talked about how I think it will end up being a good thing in the long run for the movement. Well, in this movie Harvey says much the same thing as he loses election after election and across the nation Anita Bryant leads her charge against gay rights one state at a time. With each loss in another state, the Milk just works harder to get the message out.  Finally it all converges around him. He wins his state supervisor seat and the fight comes to California with the truly insane Prop 6 trying to oust all gay teachers. Milk challenged the state senator sposoring the bill to debates. He called on all gays to come out and identify themselves so that straight voters would realize that yes, they DO know gay people which would hopefully put a familiar human face to the cause. “Never blend in” was his rallying cry. Never blend in. Oh, do I believe in that! I’ve been asked in my own life as I sit here in GOP-land why I have ‘outed’ myself in the community as a Democrat. I usually shrug it off saying “I am what I am and why should I hide it?”  I think I will now answer with “never blend in” 🙂 During a conversation with the state senator sponsoring Prop 6, the senator says “the voters are with me” and Milk responds “For now they are. But when they realize that they know us, they will change their minds.” I love that he went on the road to debate this. Into (gasp!) “Orange fucking County” and his campaign worker said it – the least friendly county in the state. Oh yippee – where I grew up! But hey, 30 years ago my state did the right thing and voted down Prop 6. And for that moment in the movie when they celebrate it, I felt good about it again.

Beyond the Prop 8 connection though, there is another theme weaving through the movie that has a real life parallel with this year. You see, Milk was a community organizer as it’s finest. One who saw the needs of his surrounding area and stepped into the leadership roll to meet those needs. He rebuilt a neighborhood nearly single handedly. The self annointed “Mayor of Castro.” He used that as a launching pad into politics and was very open about the changes he wanted made once he got into office. He equated his movement with the larger Civil Rights movement for racial equality and he reached out to anyone who needed to feel like an “us” and not a “them”. He inspired people across the country. He was the first member of his social minority group to rise to elected office. In the film, the final words he speaks into his tape recorder are “You gotta give ’em hope.” Where have we heard that before? Think of the audacity 🙂

I am not sure why the gay rights movement tugs at my soul the way it does. I really don’t know, nor does it matter I suppose. All I know is that I felt myself getting hot with anger every time Anita Bryant or anyone arguing against gay rights was on the movie screen. I know that my heart was singing with joy when he won his election and then when they showed the celebration at the defeat of Prop 6. And I know my face was wet with tears as the showed the candelight march after his death, and that those tears turned to sobs when the credits finally showed the real Harvey Milk on screen. Because I realized that I am just hopelessly in love with a dead, gay man and all he did and all he fought for.

5 thoughts on “Can a straight girl fall in love with a gay man? Oh, a dead one at that?”