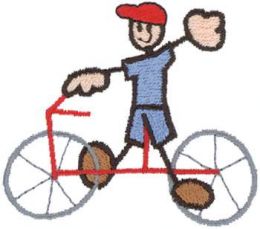 You remember it, right? What it was like as a parent to help your child ride a two wheeler? I actually only had to do it once because Sports Boy pretty much bypassed training wheels and went direct to two wheel riding at 4 years old. No help, just hit the pedals running. Music Man though, he was more traditional. Which is somewhat against his personality since he’s been Mr I Can Do It Myself since he was born. Not with the bike though. For that, he needed, and accepted, assistance. Sports Boy’s dad was with us then and he put together the broomstick handle tied to the back of the bike technique. That was pretty handy as it allowed us to take turns jogging alongside the bike as MM rode and as he would start to wobble we could steady the bike with the broom handle withou having to break our backs bending over. While I have no actual video or pictures, the highlight reel in my mind is as clear as if it all happened yesterday. I specifically remember the moment when the wobbles became less and less and I knew I could let go AND stop jogging. I remember watching him ride away from me with a feeling of pure pride and joy, my heart just singing at seeing what he had accomplished.

It’s a feeling that is the exact opposite of what happens when you see your child drive a car on his/her own for the first time for sure! THAT one is all anxiety and dread!!

Back to the bike though because I feel like he and I are doing that dance again. Only this time it is about truly being a responsible adult on the verge of figuring out how to move out. About handling the consequences of his youthful transgressions completely on his own. About figuring out a way, on his own, to deal with that past but this time with an eye to the possibilities of his own future. He’s finally seeing his mistakes with more clarity and actively making sure he does not repeat them. I used to say he was one step forward, two steps back. Then two steps forward, one step back. Now? Other than having to deal with those backwards steps, it’s been all forward movement the past few months. The dancing I do with him is trying to figure out what he needs – and will accept – from me in the way of help. And making sure it is a *need* and not a want/crutch. Of course, you would think that Mr I Can Do It Myself who has always known everything would be a natural at this! But really, the reason he IS finally moving forward is because he is finally accepting advice. Gentle prodding no longer results in a defensive and/or angry response. Just like when he needed to learn to ride that bike, he is letting me steady the handle now and then when he wobbles. And I am having to do that less and less.

Given the state of the economy and the price of rentals around here, I know it will still take some patience from both of us, but, I am also feeling pretty confident that before the end of this year I will be able to let go of that handle for good. I I also know that it will feel just like it did the first time.