I know I know, give it up right? Sigh..fine…but I’m taping all of the interviews they are making them do this week to get my fix.

I have to say though, that it’s turned out to be quite the eventful/historic Tuesday hasn’t it?

What I know about the law and judges you could fit on the head of a very small pin so I wont opine too deeply other than to say that what I have read about her since this opening came up was very impressive and what I heard from her today at the announcement made me feel confident this is a very wise selection. And whether I agree with what Obama does or not, I always know he has put great thought into things and consulted with many voices first. 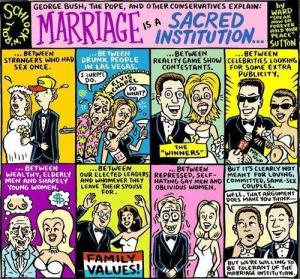 It’s an old cartoon, but it still applies and the decision is extremely disappointing but not unexpected. So, the fight continues. There will most likely be another initiative introduced in 2010 which will be more CLEAR about what people are voting on. I am also confident that the groups supporting equal rights will do a much *better* job about getting the word out than they did in ’08. Of course, even state recognition is just a part-way answer. As my friends explained who did get marriage in that window of opportunity, they still had to file taxes seperately on the federal level since all marriages are not recognized with them. *sigh* Gotta keep chipping away!

Today is also the 7 year anniversary of a guy just starting his own blog to release his frustration at the direction our country was going in:

So I guess there is enough going on to distract me from missing the lack of a new Adam Lambert performance tonight.  Allow me one thought on him: I swear that kid is the second coming of Elvis! Perusing some fan boards this weekend the level of passion devoted to him is pretty stunning and it’s not all young girls and boys. It’s international and multi-generational and really pretty phenomenal. As was said to him in one interview this weekend – he will never be anonymous again.

3 thoughts on “What do you mean it’s not Adam Lambert Tuesday?”