There have been a high number of hits to the site as results of searches on Adam Lambert. Since I know those are hitting older posts from when the show was running – and that the people probably want to find places with more current info/pics – I thought I would provide this public service gathering of some great site which deserve the hits. Because, you know, I kind of understand the obsession and the need to soak up info on him since he isn’t providing me a new song every week anymore! Screen captures included so you can get a taste for the sites.

Adam’s Official Site – run by 19E which is the company that represents the Idols after they sign deals:

As a side note – most of these link back and forth to each other and contain recordings of No Boundaries that may auto play. They also have links to his itunes page for easy purchasing 🙂

Adam’s MySpace page. Now, this one has also been taken over by 19e and been scrubbed of some cool original tunes that Adam had posted pre-Idol. It was a glimpse into what he would probably like to have on his album. Catchy dance stuff with lots of techno pop sounds. I was just getting to know the songs when they were scrubbed, darnit!

The Best Article written about Adam in the last two weeks. This gal sums things up quite beautifully IMHO.

mjsbigblog – how did I not find this site during the show? This is THE premier accumulater of all things Idol and is where I’ve found many of the good articles and videos of Adam since the show ended. They also post stats of music sales for anything Idol – really interesting to see how artists who were launched by AI are scattered all over the charts! 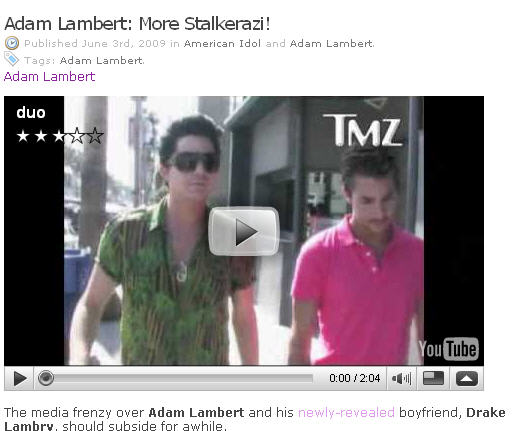 The Best Interview – Idolatry.  Five part video series with probably the best series of questions asked and clips of his performances sprinkled nicely throughout.

Last, but not least – for when you just have to relive all of his performances from the show – One site has them all right here. Takes a bit to load so be patient, but let me tell you it is a great way to whet your Adam-appetite!

All right my fellow Adam obsessed Glamberts! Enjoy those sites – trust me, they are the launching point to all great places featuring him that are updated quite regularly. Seems as if now that they are done with the post show media blitz, they are all hunkering down in their home towns resting up and getting things in order before they meet back in CA to rehearse for the tour.

Oh – and for the record – Adam is NOT on Twitter! NOT. You’ll see that discussed on a couple of those sites. Those are all imposters/fans on Twitter right now.