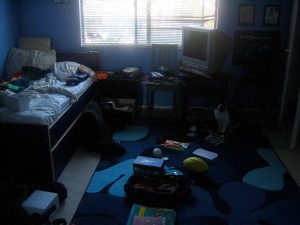 Yes, it is kind of cat heaven, isn’t it?

I sure hope that next year we don’t have passport drama right before SportsBoy has to leave! Last year it was that it was expired and his dad had to drive him up to LA to get a rush renewal two days before. This year it was the phone call at midnight asking me to search his room at my house for it because..well..he and his dad couldn’t find it over there! Now, I had not even once laid eyes on a passport all year in that room. If I had, I would have tucked it away with mine and made sure it was in his dad’s hands well before his flight left. But no. After kind of waking up I stumbled into his room – which was at it’s cleanest all year! – and started digging around. Meanwhile we tried to reconstruct how events had unfolded the day he returned last summer. At 12:30am they arrived to help with the hunt. *Finally* his dad remembered that we shouldn’t be looking for a loose passport, but for an airline pouch that was given to him since he flew unattended, but with flight attendant escorts last year and the airline gave him the pouch to carry all his documents. At the mention of a pouch SB and I remembered – night stand! Sure enough, there it was (phew). So, a mere 6 hours before his flight was taking off, he had everything he needed in hand. Yeah…nothing like last minute drama eh?

One thought on “Do you see a passport here?”