(I didn’t add an ‘of x’ to that since I really don’t know how much I will break this up, I just know I better start!)

After the challenges of getting in to Pittsburgh in August, the non stop Southwest flight to Baltimore Thursday morning was a breeze. Even having spaced on printing my boarding pass as soon as it was available and getting a kind of late (B46) position in line, I lucked into a window seat towards the back with a lovely elderly couple. We left on time and aside from some turbulence over the midwest, we made great time time an landed 40 mins early. The Supershuttle ride was a tad adventurous (often bumpier than the airplane!) but I arrived very quickly after my roommate from Maine & Alto2 from Florida so they were in the lobby to greet me. Right away I noticed something that made me smile – also gathering in the lobby were groups of Breast Cancer 3-Day walkers! The DC event was taking place while we were there. I loved being in the middle of them all & cheering for them whenever we saw them all weekend. Definitely added to the spirit of our weekend especially one of the moms who was with us has successfully battled breast cancer since the last time we saw her.

Alto2 had scoped out a restaurant for us to have dinner nearby in Chinatown. After 2 more moms arrived, we set out on foot (there would be a shit-ton of walking this weekend!). 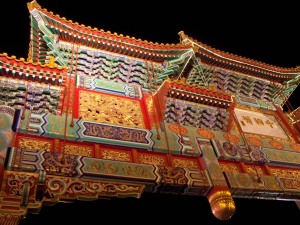 The restaurant was called Burma and it turns out that my friend from high school who I saw on Monday morning knew the original owners. Former Burmese embassy employees who lost their jobs with the upheaval in Burma & the overthrowing of the govt they worked for. The couldn’t go back safely so they opened a restaurant and settled in to DC  – smart! Also, very good food. We figured it must be darned authentic since we saw a Tibetan monk dining there too 🙂 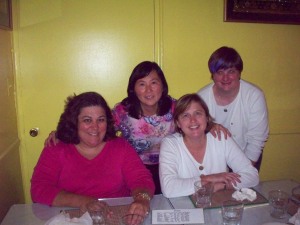 My dinner companions Thursday night. Please note there is a gal there with colored hair. Does anyone remember my roommate from Pittsburgh? Well, SHE has a streak in HER hair, and there I am again with another brightly colored roommate in DC 😉

Side note – I secretly WANT to have a streak like that in my hair, but it just would not fly with the job I have. Darn it! I’ll be the crazy retired lady with long gray hair and a purple streak in it 30 years from now. Watch for it ;->

As always when we gather, each night is spent sitting in someone’s hotel room in our jammies talking away the night. We generally solve the problems of the world, and maybe one or two of our own 🙂

Friday morning we set out for White House tour #1. Two of our moms had secured WH & Capitol tour tickets for the weekend but for different days and times. Friday we had a 10:30 appt. So we made our way on foot to the check in spot on the east side of the grounds near the Treasury Dept building. It was HOT! A word about DC weather – WTF?!! The temps swung all over the damn place! Friday was sunny and in the 80s easily. It ‘cooled’ down to 77 by midnight. 77?? Then Sat it *dropped* down into the 60s & rained a bit. Nutso.

You can’t bring *anything* into the WH so no pictures. There isn’t even a locker to store your things like there was at the Capitol so we all just had our ID’s with us in our pockets and not much else. Also, guided tours stop at 10 (which we did not know before) so we just had to wander around the visitor access area on our own, peeking into rooms and just trying to figure out what we were seeing. Kinda of a bummer, BUT…Friday was exciting because we knew the press was gathering on the west side rose garden for the President to speak right when we were there about the Nobel Peace Prize award. Now, THAT was a shock for everyone to wake up to that morning wasn’t it? Out of the blue! While I’ve since read up and seen some commentary showing how the Committee has in the past handed out the award to people who have simply *started* a movement vs having actually accomplished its goal, it still is odd. As an American I am proud, not only of his recognition, but to find out that American’s dominated the award in *many* categories this year. Anyhow, that sure created a buzz on the street and for us to be on site while that was all unfolding was pretty thrilling!

Even without a guide, I recognized the East Room as the place Obama has already held some press conferences. The room this weekend was laid out differently so I was actually able to stand in the doorway of the room that has the red carpet hallway leading into it and look out at the room from the vantage point Obama has at the podium. I got a huge kick out of that!

I’ll dig up some online photos as I roll into the Saturday guided tour when we learned some cool bits of trivia.

From the WH we then were metro bound to get over to the Capitol end of town to pick up tickets for our tour there. We had to go into the congressional office building so the mom who secured those tickets to pick them up from the congressman’s aide. So, being the political uber geek that I am, I just LOVED being able to go into one of their office buildings and walk down a hallway seeing who else’s office was on the floor/wing we were on. It was odd. No rhyme or reason we could see. Not by party or state or alpha order. I only recognized one name and it made me laugh out loud and I HAD to take a picture. If we were not in such a hurry to get out for lunch before our tour, I would have thought to have my friend take a picture of ME pointing at the sign and saying “No, YOU lie!” 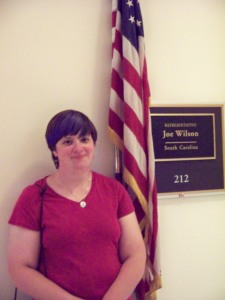 I’ll finish up this version with my photo I took to honor a mom who was missing this year due to swine flu – yep, she got it *just* before the trip and while she is fine now, her whole family went down with it and we are all very very grateful that she stayed home!! But, we missed her and we particularly missed her photographers eye. One thing she loves to do is take photos of the food we have. So this one’s for for her – French Fries I had at lunch at a walk up cafe outside out the Capitol: 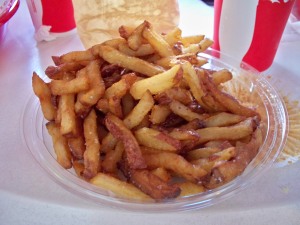