What do you think? Who is old enough to remember these? 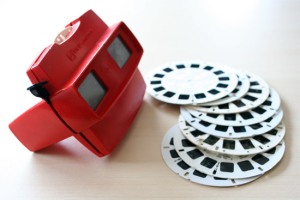 I had a red one (or maybe it was orange?)  Now, I know they still make these, but you have to think back to the pre-VCR days when this was really all we had to re-live our favorite movies. It was this, or a book to see views of the Grand Canyon, or even Disneyland. And the images were in 3D which seemed to bring them to life in a way a book just could not.  Of course, it’s pretty hard to get pictures of a viewmaster image, but I did some searching and found a few good ones online – sadly though not the main one that sticks in MY memory banks. Since my favorite Disney movie was Jungle Book, then naturally the reel for that movie was my favorite. And there was one image just after the fight with Sher-Khan of Baloo laying in a beam of sunlight, looking as if he was dead. It was just the saddest sight and on the viewmaster for some reason it felt like you could reach in and touch his fur and you just wanted to stroke his nose and thank him for being a very brave bear.

Ok, so it was magical to 7 year old eyes anyway 🙂

I love this one because it shows exactly how a kid would use the viewmaster:

Honestly I was surprised they are still being made, but yep, here’s one from a more recent era:

Funny how just seeing one of these images triggers memories of the ones I had eh? I remember the 3D part, that there was a brief description on them describing the scene. I remember the scenic/historical shots being particularly brilliant – compared to photo quality at the time of course! I mean, the Viewmaster was *cutting edge*! (ok, so I know that’s hyperbole, but it sure seemed like it, again, to the 7 year old mind!)

Did you have a Viewmaster? What was your favorite reel/image?

8 thoughts on “Was the Viewmaster a precursor to the VCR?”