The Audacity to Win: The Inside Story and Lessons of Barack Obama’s Historic Victory by David Plouffe

My rating: 5 of 5 stars
A behind the scenes at what was an historic Presidential campaign as told by the fellow who put it all together. David Plouffe tells the story of putting his life on hold for two years to embark on a pretty remarkable journey of thinking outside the box, taking risks, and doing their best to not play dirty in a game where mud slinging skills had become critical. While a certain geeky passion for this topic is probably necessary to keep the reader engaged, Plouffe intersperses the dry details with plenty of personal glimpses.

It was really interesting reading this now a year into Obama’s presidency and to be able to see examples from the book which highlight the development of the man we’ve since seen in the Oval office. His calm demeanor, insistence on respect & civility at all times, his ability to study & weigh the benefits and downsides of the issues in front of him were all on display in 07 & 08. I was particularly struck by his ability and willingness to take responsibility when it was he who had a mis-step. No blaming and finger pointing and excusing.

Of course, the comparative stumbling & disorganization of the McCain campaign made Obama’s look even better. So too did Clinton’s. Both those campaigns were entrenched in the old ways of running things and were frequently caught off guard by the new ideas and quick reactions of a campaign whose staff were so young and filled with fresh ideas. As Plouffe points out at the end, over 95% of the volunteer staff were under 30 years old. Wow!

At the end, I have to admit that even after more than a year has passed, I still did tear up just reading the part when Obama is declared the winner. As someone who had watched this so closely from the spring of ’07 when I saw all the candidates speak at the CA Dem convention, this was so much fun to relive with an insider.

View all my reviews >>

Up until last week, this was my pile of books To Be Read. I was alternating between fiction and non fiction. The paperbacks had originally been given to me in 2002 and there were a LOT of them. I was happy to have whittled it down to this manageable pile. The non fictions had been collected since 2005 (I have a tendency to read those more quickly since they tend to be topical. I’m sure reading Bill Clinton’s book now will be really weird!): 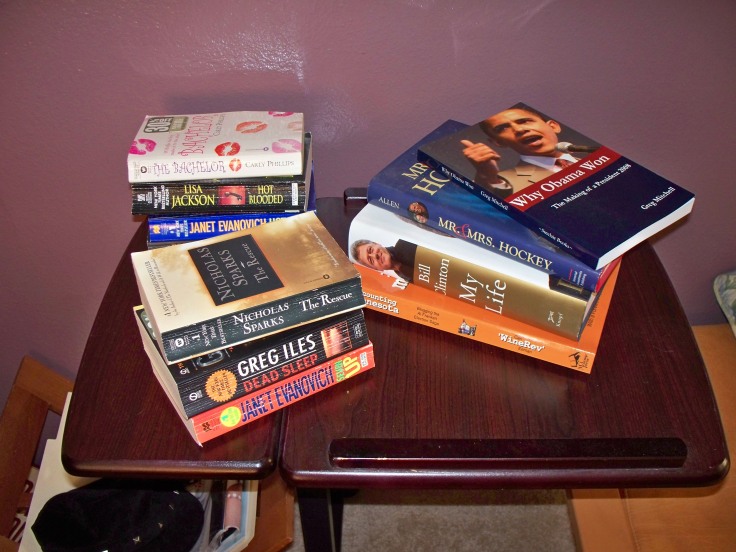 However, after helping to clean out Jacqueline’s house last weekend, in addition to the books above which I would have been done with by about mid-May, I now have these:

Yep, I think I am set for the entire 2010 reading challenge!!