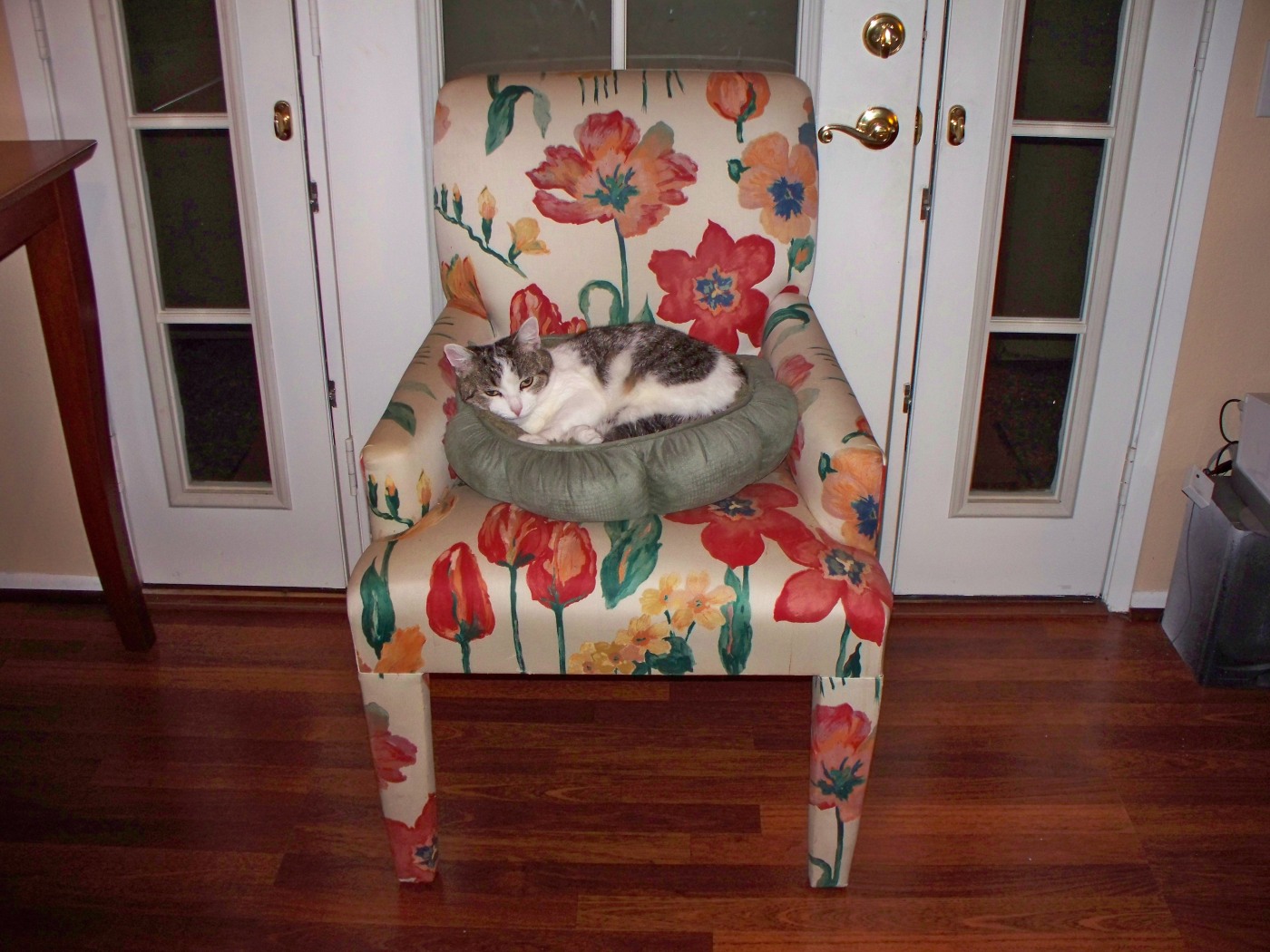 I remember when Jacqueline got this chair. There were originally two. She picked them up from a nearby consignment store and they were the perfect match to her dark red leather sofa and the deep blues in much of her southwest themed decor. I loved those chairs. So did her dog, Bailey 🙂 So much so that she had to ditch one of them before moving to her last house. He had just completely shredded it to bits. Luckily he spared this one. She’d had to move it out of her living area and into her office which I think made it less tempting for him.

I’ve been toying with the idea of resurrecting the idea of having a puzzle table. That’s actually what the square table I have in that corner was purchased for. It’s the perfect size for doing puzzles. Of course, I bought it literally two months before Amber joined the house. Kittens + puzzle pieces are not a good mix so the table has just been there, looking pretty & holding pictures or candles or vases etc. However, my friend Robin’s recent pictures of the puzzle she has been working on – in a house with two cats – has inspired me to give it a try now that the cats are more..mature 🙂

So I decided that Jacqueline’s beautiful chair should sit with the soon to be puzzle table. But first, I needed to let the cats get used to it. No amount of airing out & cleaning would remove the beagle scent from their noses. I placed Amber’s favorite bed on it. She checked it out and sat in it for a bit but then left. Chip does love his beds, but normally he is much more comfortable on the floor, or maybe on a low sofa seat. However, he decided that this new chair was HIS and he proceeded to settle in for a deep sleep. Fitting really. Jacqueline always described both herself and Bailey as having “issues”…or really, to say it in her voice: “Ishooooos!” It was her way to acknowledge her anxieties. And she was right about Bailey – he is very filled with “ishoos”. The dog *freaks* if there is a flying bug in the house. Heck, just the word scared him. Jacqueline would say “Is there a BUG?” and his eyes would go wide and he’d scurry away. It was too funny. I started saying the same thing to the cats – only their response it to come running because hey, a bug? That’s FOOD! Well, after you play with it a bit of course. Of my two cats, Chip is most certainly the one with “ishooos”. The runt of the litter he is a nervous nelly who will bolt at the slightest change in sound patterns in the house. It’s no wonder he was drawn to that chair. He knew it belonged to kindred spirits 🙂

4 thoughts on “Legacy of an animal lover”