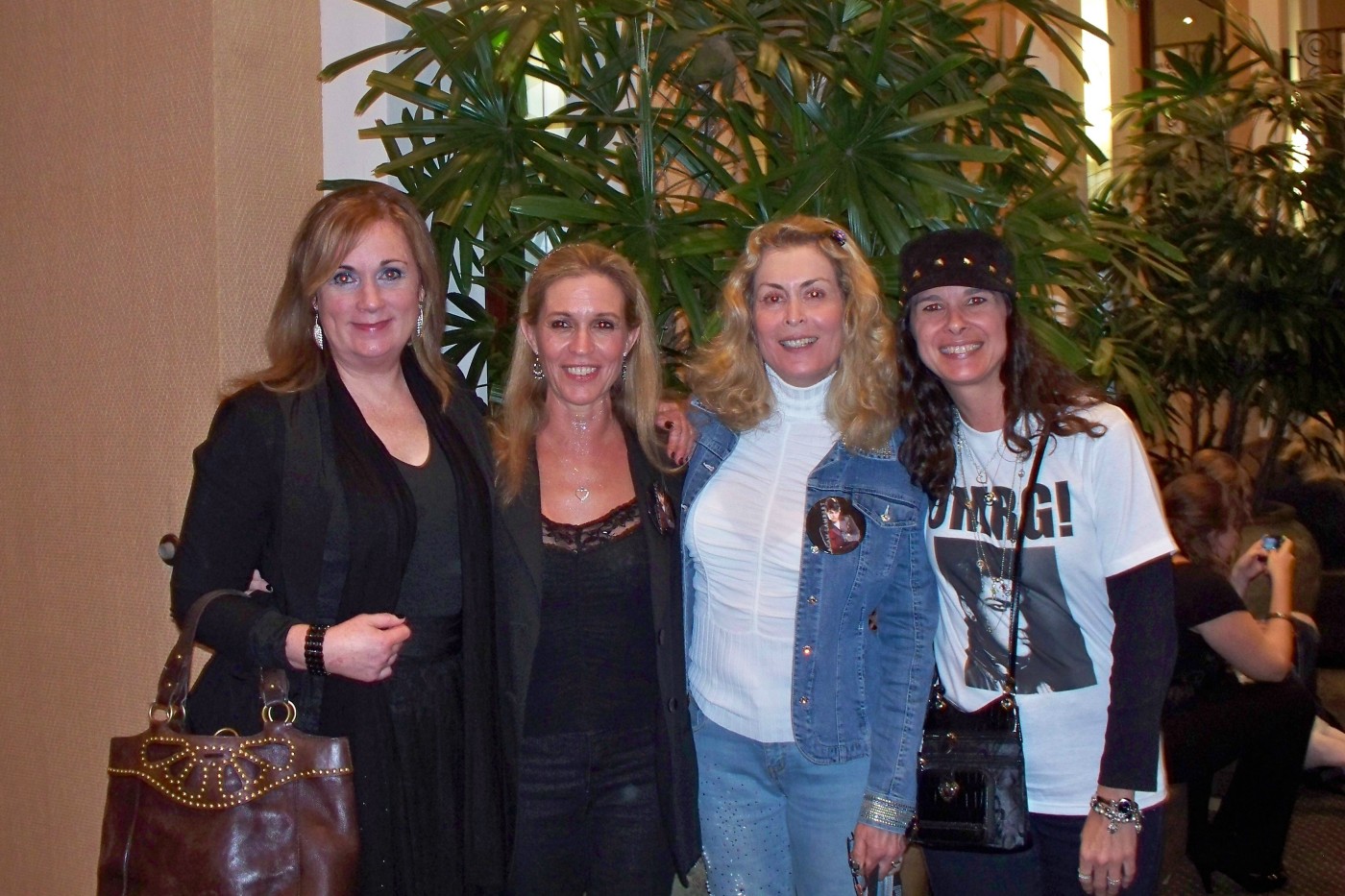 First, to give you an idea of what Adam means to his fans – watch this video of 89 year old Isabelle speaking about what he means to her:

Now, watch when she got to meet him backstage before the concert last night. Look how attentive he is and then also at how she just cannot stop looking at him!

Now, my story and then some video from the concert taken by other audience members.

The day I found out Jacqueline had died, somehow in all that shock a tweet filtered through my psyche – news of Adam doing a concert at the Fantasy Springs resort in Indio which is about 2.5 hours away from me near Palm Springs. I did nothing at the time of course, but the next day the memory of that tweet tickled my brain and I went online to check it out. Tickets were reasonable enough, it was on a weekend when I would be on my own so I could easily drive up and back in one day/night. As I hit purchase on my ticket, I get a text message from Jan “Hey, are you going to see Adam in Indio? Kathleen and I are going!” I picked up the phone and told her how perfect her timing was 🙂 Turned out she had hopped on the phone the minute the concert was announced and was able to purchase one of the very limited hotel stay/dinner/super great seats packages. Kathleen had been her Adam concert partner several times already and had been willing to split the cost with her. It was much too rich for my blood to consider, but I told her I was happy with my sorta crappy seats and driving back and forth because – who cares? It’s Adam! Well, then she immediately called Holly who also didn’t want to do the luxury package and Holly became my banzai drive/crappy seat partner.

(FYI – I met Jan and Holly at the American Idol concert in the summer and Jan is the one who convinced me to stay for the autograph lineup after wards and who positioned us perfectly to see Adam first and without much crowd rush).

So yesterday I picked up Holly – who also quite coincidentally lives about 5 blocks away from me! – and we got to the resort to meet Jan and Kathleen at around 5pm. They had dinner reservations as part of their package but since this is one of those all encompassing Indian reservation resorts, there were plenty of places for Holly and I to find for dinner. The place was jam packed with glammed up Adam fans! Glitter and colored hair and painted nails and feather boas and sparkly/blingy clothes all over the place. Everyone smiling at each other and admiring the creativity of their look. As you can see from the photo, I went for the rocker chick look wearing a fabulous t-shirt designed by the owner of one of Adam’s fan sites and all sorts of fun jewelry. I got stopped a LOT throughout the night for people to see my t-shirt and even people wanting to take photos of me! In the lobby we were running into more people who we all remembered from either the San Diego AI concert or who Jan or Kathleen had met from other concerts. It was a big old Glamily reunion. I also ran into said web site owner who was the only other one wearing that fantastic shirt. Doug gives great hugs and I was very happy that he was able to fly out and see Adam given how much work he has put into the OMRG site. Adam’s dad walked through the whole scene and the room got kind of quiet as we all recognized him. I cannot imagine how life has changed for his parents! They are easily noticed by his fans as he is at this point.

We made our way to the venue after dinner and scoped out our seats. Even though it is a small place – seats about 3500 – our way in the back on the floor seats were pretty darn bad. Yes, there were video screens but even those seemed small! When we went up to see where Jan and Kathleen were, we just squealed. DEAD center in the DEAD center section just 11 rows back! Holly and I seethed in jealousy and then trudged back to our seats. We bucked up our spirits and continued saying we were just happy to be there (which we were) and we started chatting with our bleacher seat buddies.

Oh, the people we met!! Not a ONE was also from San Diego – everyone from far away places, MANY traveling alone knowing full well it would be a gathering of kindred spirits. Alberta CA, Allentown PA, Arizona, Ohio etc etc. We saw a dad with his two young daughters, lots and lots of varying age adults – but the audience did skew older 🙂 Given the kind of out of the way place this was, it makes sense that it took people either living close by (older and generally quite a thriving gay community out there) or people who had enough disposable income to travel. Which tends to mean empty nesters. Many truly wonderfully supportive husbands with their glammed out wives. Isabelle was not the only elderly person in a wheelchair – I think I saw at least a dozen such women there. A really fabulous place to be.

So how did Adam sing to me if I was about as far away as I could be from him?

There was an opening act. Poor girl. Nice enough voice but…well..we wanted Adam! And the place was PACKED. But Jan was watching with her eagle eye and noticed there were three empty seats around her. And they stayed empty. One had been occupied, but the gal had moved up even closer herself to sit with another group. The other two were just single seats in their row that were clearly never sold perhaps? Anyway, she texted us about it but we were afraid the vacancies were only due to the opening act. Then it got closer to Adam coming out and Jan called us, but we didn’t hear out phones. So she marched back to us and grabbed my hand and said “Get your butt up with us NOW!” We bolted! The next thing I knew I was sitting in FRONT of Jan in the TENTH row dead flipping center. It was at that moment that my knees got weak. Then his parents and a whole entourage of his friends were escorted out and into their seats – which were not as good as ours!!! They were off to the left more. I couldn’t believe it.Here’s what it looked like after the concert was over. You can count the rows of chairs in front of me.


No, I didn’t take any photos or video when he came out. I’ve written about that before. I don’t drink and I don’t video or take pictures. Because I can’t! I want to soak in every moment in full focus. And I did. Because he was so close I could see the whites of his eyes. And he could see me. Really. You see, up there on stage the first few rows are below the performers so he has to look down at them. Standing where he stood most of the night, as he looked up just normally – he was looking at our rows! The gals behind me said the same thing. But then, I was in front AND I was not wearing all black. I had that white background t-shirt with is own picture on it and my hat. And the gals in front of me sat down a lot and were quite short. So there were several times when I really swear he looked right at me! Especially during the middle of the concert when he did virtually an acoustic set of songs. I’ve got videos of those below that I found on You Tube. I chose these two because one has great shots of how colorful he was. He matched the ambiance of being at an Indian resort by wearing Indian accented jewelry and accessories. Feathers and more color in his hair than usual. The other one I chose due it’s really crystal clear sound. The acoustics in the venue were fabulous. So in the videos when you see him looking straight ahead, he was looking at me.
Really.
I swear 🙂

3 thoughts on “Adam Lambert looked into my eyes and sang to me – seriously!”