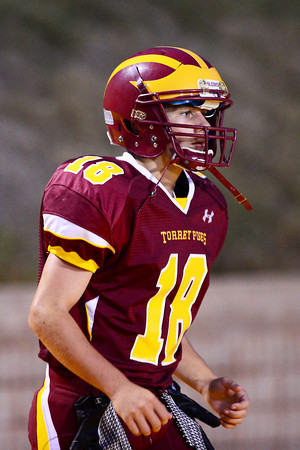 I swear this blog wont become all Friday Night Lights football but…..what’s a proud mama to do but document her son’s glory days eh?

The team is blessed with a fabulous photographer who has pics up often on the same night after a game. Our #18 being a junior and having just come off of his knee injury wont be starting and we knew it would be a rare opportunity if he got on the field.

Well, with the team leading 35-0 in the 4th qtr, the rare opportunity presented itself and the grandparents, parents and friends were thrilled to see him go in for one offensive series. He blocked like a stud if I do say so myself 🙂 The rule for wide receivers is to hold your blocks for AT LEAST 6 seconds after the ball snaps. The first time the play unfolded so fast that he didn’t have to but the second time not only did he engage the defender for more than 6 seconds, but I can bet you that guy is still wondering who that little #18 was who busted him up in the chops a couple of times!

Anyway, here’s the best pics from the game this week. Fingers crossed that he has more to come!