Turning this into the All Sports blog…(for now)….on Saturday morning after our Friday Night Lights fun, I ran a 5k trail race.

It was a wee bit warm.

And it was out east where it is…well..warmer!

San Diego cannot seem to shake off this hotter than normal summer. August and September have been varying stages of hot to brutal. Humidity way above normal and ocean breezes non existent. Friday it turned from humid, to a dry Santa Ana without winds. It was like someone turned the humidity switch OFF and the temps just jumped.

Anyway…. so this is what it looked like at the race start/finish at 7am: 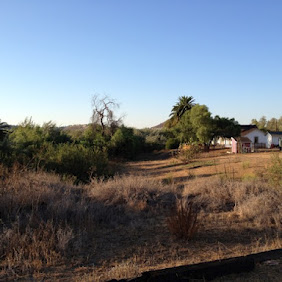 We were out on the eastern edge of Lake Hodges and it was really beautiful there and also really really HOT!

Since I didn’t know the trail at all and wasn’t sure about footing or hills or, well, anything – and because it was so hot I was not planning on setting any speed records here at all. This was just about having fun discovering a new trail and being there to cheer on the girls when they finished the half marathon that was also part of the event. Here’s the map of the routes – mine is the short blue one (thank gawd!) 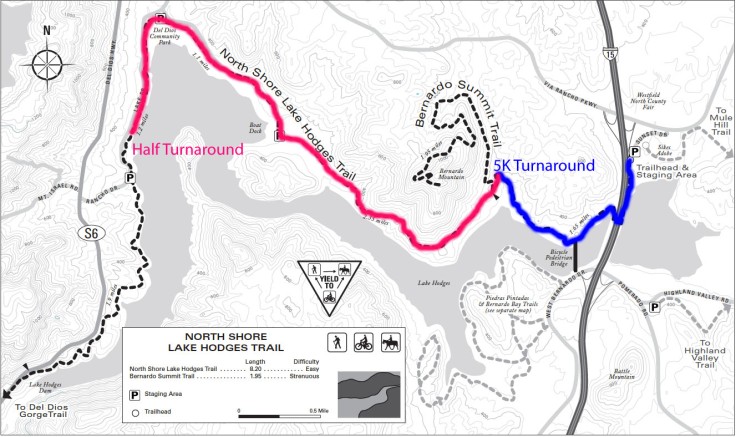 I have to admit that when the weather cools down I think it would be awesome to run on the western part of the trail just to see it. Renee ran on it regularly years ago and she said it is pretty sweet with great lake views all the way.

Her opinion of the trail after her race might have dipped a bit though – she took a nasty fall and STILL came in 3rd in her age group – her race report is here.

The event was nicely controlled as far as the number of entries so it didn’t feel terribly crowded at all (my main complaint after the Chargers 5K). In fact, the 5K was barely even a true trail run! Up until that black line extended out from the course (a bridge), we were on a very nice sidewalk. It was plenty wide for a group of runners and the only hills we encountered were quite gentle. The dirt trail we did go on was also very wide and there was only one turn that was kind of hairy with footing but that was it! Shoot, the biggest problem were the mountain bikers who obviously love that trail because they were all over the place and more than once they came close to taking out a runner.

Otherwise I think I *could* have set a PR if I had known how easy the route would be. I was fine with hydration because I passed a station twice on the route so even in the heat that was no worry. As it is, I took it pretty easy until the turnaround when I then knew what to expect heading back. People who had run ahead of me on that first half now came back within my sights and I passed at least a dozen before getting back onto the sidewalk path. Of course the hottest part WAS that last straightaway along the the freeway heading back to the finish but by then I had a nice cadence going in my head and I passed a couple more runners.

I finished in 31:53 – a 10:09 min mile pace which put me 22nd overall and 8th in my 40-49 age group. That was faster than I anticipated going given all the unknowns and the heat, but I also know I could have easily done a 30 min race had I known more what to expect. So overall, I felt pretty good about that!

One thought on “She Runs 5K trail run”