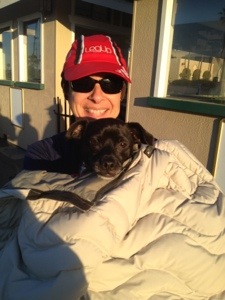 No, I didn’t get a dog (oh, how THAT would traumatize my spoiled kitties!!) But, I did borrow a dog to participate in another Just For Fun 5k event – The Petco K9 5K that was held Sunday at the racetrack just by my house. As you can tell from the pictures – it was COLD. We’ve been under frost warnings for the last three night/mornings and they were not kidding about it.

When we met up with Tanja and her dogs, the one I was going to run with – Miles – was just shivering! Eve had to take off her jacket and wrap him up for a bit to get him to stop.

Pre-race photo – Tanja has her ridgeback Sarah. Last year they finished second, this year they were third but with a better time so for Sarah, it was a PR on the course 🙂 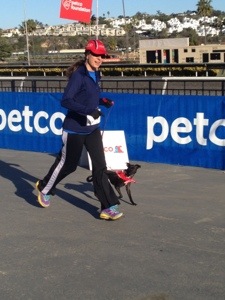 I was just having fun, not going for speed and once Tanja and Sarah were far enough in front of us that Miles could no longer smell his mom, he stopped running full speed and we settled into a nice trot.

Running with a pack of dogs is hysterical! Here’s a few things you never hear at other race events but which were the most commonly heard things at the K9 5K:

“Water for you and your dog! Fire hydrants and porta potty’s!”

and my personal favorite made as both a question (because the runners forgot to bring their own):

And then again at the water stops:

Yeah….I was giggling a lot. There were also the sights and smells of many dogs making use of the poop stops. Weee. Including one larger dog who decided he had to go NOW and that meant cutting across my path dragging his poor unwitting owner into the trees. I managed to keep the rubber side down, but it was a little more treacherous than the usual race courses!

Miles did great – he only tried to veer off a few times and a quick “heel!” got him back on track. I have no idea about our time because I wasn’t participating for that reason. It was just fun. 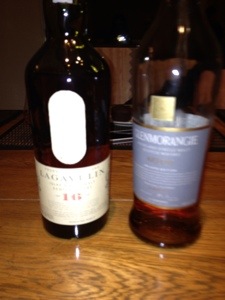 Oh, and dinner with all the girls later that night topped off with some after dinner drinks? Just added to the fun of the day.

(No one knows why that photo is blurry..ahem)

It was a great way to launch into Eviction Plans, Version 2.0 which will mean shutting down the longer runs/workouts for a couple of weeks.  FWIW the fibroids staged a last ditch attack in the middle of everything yesterday but I refused – REFUSED – to let them keep me from doing what I wanted to do.

As of Wednesday they will be gone – gone I say! Gone to where the termites lay.