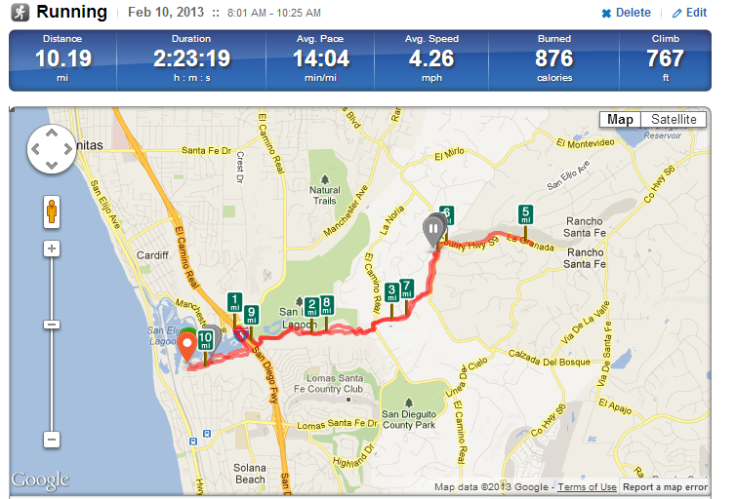 I do not know WHAT I was thinking. The last time I ran for this long was before surgery when I hit the 9 mile mark. I figured I would aim for some 5-8 mile routes before even trying to up the distance to 10 miles.

Unfortunately, I have this…thing..in my brain…it wont let me stop once I start…I’m thinking it’s my own personal Energizer Bunny when it comes to running. When Renee texted me that the run for this past weekend was 2.5 hours, I hoped that Audrey would join us because there would be no way she would run for that long and I would tag along with her and pace myself properly. But no – she couldn’t come along and even worse, Tanja was there for the first half. She happens to think a sub 11 min mile pace is “easy”.

Anyway, I did start out hanging just a little behind them for the first mile, but then I forced myself to slow it down significantly. In my mind I was thinking I would allow myself to run for an hour, maybe 90 minutes and then walk.

I ran east for exactly 5.05 miles. I ran into Renee coming back towards me just before then so she was with me at the turnaround and then for another 2.5 miles. Chatting with her made that time fly. So did watching all the runners who were doing the San Dieguito Half Marathon race which was on part of the eastern end of our usual route. That was nice because the streets were closed off from traffic and we had the fun of watching other racers (and had water offered to us and cheering along the way because people assumed we were with the pack despite not having race bibs on!)

Now, in all honesty thanks to some very comfy long compression socks, my camelback, and some energy beans, I felt totally FINE until somewhere around mile 7.5 Then the t-band on my knees started tightening up just a tad. I hit an official wall of OW right at the 8 mile mark and then I did start a routine of walk/run until mile 9 which opened up nice and flat and easy along the west end of the lagoon. My timing was great – I knew I could even walk the last mile and still come in under the 2.5 hour time.  Renee had taken off ahead of me again when my knees started aching and as she doubled back she picked me up again right there at the 9 mile mark. By this time well over 2 hours in – she was feeling the aches and was not moving quite as spryly as she usually does either. So we bitched and moaned our way through to the end crossing over mile 10 just before climbing up the last painful hill at the 2 hour 23 min mark. At that point we both called it “good enough” 🙂

I came home and stretched and rolled my t-bands out (homemade tennis balls stuffed in a stocking roller thingy from physical therapy) and barely managed to walk without groaning all day. But, the stretching and rolling were effective and surprisingly today I am sore – but not horribly so.

I’m going to try to do my best to run 5 miles on Wednesday – I’ve got a plan to leave work a tiny bit early because I’ve been rocking it with the lease processing and I think I can take a tiny run break to get in a mid-week run vs just running on Sundays.