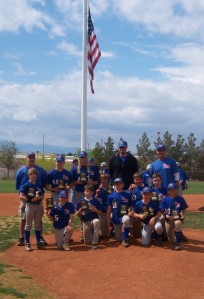 I know, I know, back in December, I thought I had witnessed The Best Baseball Game Ever. It was. But now there is another one. One that can rank alongside the first one for completely different reasons, but one which was equally fun to watch. Whereas the first one was a pitching and defense nail biter, this one had more offense. LOTS more. Not always for the good guys either.

The Majors division 12u championship game matched the overall #2 seed vs #4. Our team had gone 3-1 in pool play to earn the #2 spot. Along the way they beat the #4 team 6-5 but it was the closest of their early victories. The one loss was a tough 3-2 game to the team that ended up #1. However, they went down to the #4 seed in the semi-final game which we watched unfold and we could see that the #4 team was really fired up. For them, beating that #1 team was the takedown of a rival and you could see how pumped up they were to do that. Unfortunately for us, they went right from that victorious high to the first pitch of the championship game in just 30 mins.  Momentum was with them. And they used it. Big time. We started #44 as our pitcher who can be very very effective. Just not this day against this flying high team. He threw a total of 4 pitches and our left fielder watched 3 straight home runs fly over his head. It was so painful to watch. The coach went to talk to him after the second blast which clearly did not work and after the third one he had to replace him. There is just no way to expect even the toughest 12 year old to settle down from that. So he brought in #51 – yes, the same #51 who closed out that classic December game. #51 was completely fresh in the respect that he had not pitched all tournament, but he was also weakened by a cold that had hit him the night before. And he gets put in to try and shut down this team on this massive high. Well, shut them down he did. You could feel the momentum stabilize. Meanwhile, on the bench, #44 gathered himself. One of the coaches gave him a pep talk. He got up, put his helmet on and showed the team that he was ready to hit. Gutsy. Even better, the team came back into the dugout and immediately pumped each other up to hit and get those runs back. In classic baseball poetry, #51 was also our leadoff hitter. He got it started on the first pitch with a sharp single. The next batter beat out a ground ball for another hit. Then #44 came up ready to punish the ball for the indignities he suffered. Well, he didn’t get his anger out with a home run, but he did get another infield hit and now the bases were loaded. Momentum was swinging. And the hits kept coming. Two batters and two more hits later it was tied 3-3. As I put it then “well, now the other team knows they are going to have play a full baseball game, not just hit home runs!” Then our girl came up. #20. As is usually the case at this tournaments, when the other teams see a girl, they immediately make light of her. Or worse many times. And I don’t mean the kids either.  As usual, #20 makes them shut up pretty quickly with her skills. She catches, pitches, and plays 3rd base like a pro. Oh, and she can hit a little too. She promptly smashed a two run home run to put the team ahead. A few more hits and the first inning ended with our team up 6-3.  We had a game. To their credit, the other team kept at it too. Chipped away to make it 6-5 going into the top of the 6th and final regulation inning. #51 pitched the whole game. Coughing between pitches, he used every point in the strike zone and held them back.  The defense was flawless behind him. But, he make one bad pitch in that last inning and they got one more home run to tie the game. So there would be a bottom half. Throughout the tournament our team had several home runs from hitters which we would expect that. However, the one really big hitter had been kept in the ballpark for 4 games. He had a lot of big hits, just nothing clearing the fences. He steps up with one runner on and smacks a 2 run, championship winning home run. WHEW!!!!

What character the team displayed huh? Coming back like they did. Picking each other up. The heroic pitching of #51 yet again. It was just another fantastic weekend of great baseball games. Definitely worth the trip 🙂