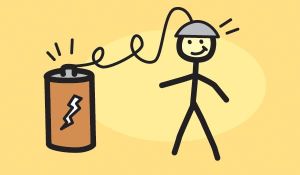 Thankfully for myself and everyone around me, I was able to get some quality time on the sofa this weekend. Saturday’s workout kicked my ass since there were only four of us with the two trainers and I am very sore around my abs today, but as usual, it was still a good start to the day. Then there was the LL game and then driving MM to work, then lunch, then a nail/wax appointment and THEN, around 2pm…I was done for the day until 9pm when I had to get MM from work. So, I slept. A lot. Woke up now and then to watch DVR shows from the week and to read the paper and have dinner, but mostly, I slept 😉 It was awesome! This morning I slept IN and then finally awoke feeling recharged enough to tackle a very dirty house – which is now quite clean. Yeah, even with these sore muscles, I got the place clean. Went to the grocery and then had some lunch and then again, by 2pm, all my chores were DONE and you know what I did? Yep, plopped onto the sofa to watch the Padres game and then slept some more! It’s been rather delicious actually. Then SweetPrince stopped by for a visit. Sure, you think he came to see me, right? Not quite: 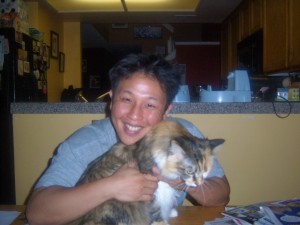 She remained under his nose the whole night. Even rolled over for some serious tummy rubdown a couple of times. Utterly disgraceful 😉 And after? She was DONE kinda like I had been DONE: 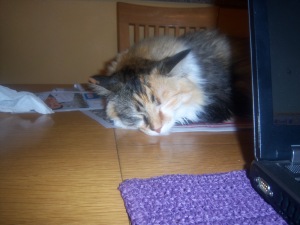 Oh yeah, and the earthquake that you probably read about if you are on Twitter? Yes, I felt it. I was on the sofa watching TV and it shook once – I looked around to see if one of the cats had just jumped up – no cats, but then sofa shook three more times each shake stronger than the first. And yet – I was the only one in the house to feel it! The lights didn’t sway and nothing made any hint of a sound. It was just the typical rolling shake you get when you are far enough away from an epicenter to feel it, but not get the big jolt. Since it was up in south west LA, we got the nice roll. As soon as I felt it I went on the USGS website, but that was not updated so I went onto twitter and sure enough, the most recent two posts from people I follow were San Diegans saying “earthquake?” What a hoot! Twitter is the bomb, I tell ya. A quick refresh and then another friend from up in LA described quite a shake which immediately clued me in to where the epicenter was. 5.0 too and my guess had been at least a 4 or 5. As I told Sweet Prince who felt *nothing* “My ass has been in So Cal for 44 years of earthquakes – it knows it’s shakes!” Thankfully it seems as if no major damage up north. One friend’s house it at the epicenter exactly and other than some pool water splashing out she said everything is fine. It sure was fun to know right away thanks to Twitter!!

One thought on “Recharging”