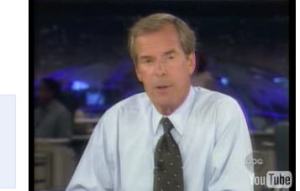 I wish I could have found a good video of him at the end of the day.  An image of him that I have stamped into my memory. With his sleeves rolled up and blue ink marking his hands as he’d most likely clutched the same pen all day long as he got his viewers through the day.

I remember the catch in his voice and the horror as the 1st tower fell because we just didn’t quite know what was happening. Then once we knew…watching the 2nd one was even more tragic. His voice soothed though. Other than those understandable moments, he was perfectly composed and properly somber and doing everything he could to inform.

I tear down the current state of the media a lot (and probably will a lot more on the other site I am building :-)) but on that enormously tragic day – when lives were lost to terror and the security of a nation was shattered – Peter Jennings was *everything* the media is supposed to be.

So as we remember the fallen and the heroes and the rescuers and families of those left behind – this day also makes me sad again for the subsequent loss just 4 years later of the man who got me through that day and then days and weeks thereafter.

4 thoughts on “Thank you Peter Jennings”