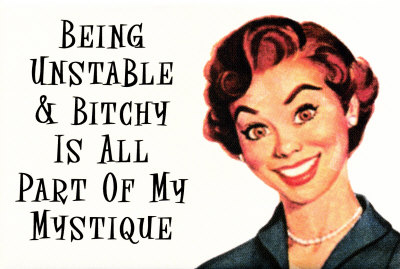 Pardon me for a moment while I bitch about a bitch who frequently starts into her moments with the phrase “I don’t mean to be a bitch, but…” Because after a lotta years of being around this person I think I can safely say she fits the definition. I truly do hate to call anyone else that term, but this person has, beyond any question, earned it.

The thing is, on the whole I like her. We’ve hung out. I’ve known her for many years. It’s always easy and happy and perky when I run into her around town.

But, MAN, can she be a royal BITCH when it comes to dealing with her on a volunteer basis! The classic definition of demanding & believing the world revolves around her family. Her time is OH SO much more precious than anyone else’s you see. And really, if she was just a grouch all the time, I think I would just call her a grouch. But since I know she CAN be very nice & warm and friendly and, well, classically perky with a really good sense of humor…it just makes the ugly side of her so MUCH uglier, you know? Because at her age I think she *has* to know she’s being awful to people. Volunteer people! People there to give her children the opportunity to play sports in the community. Board members, spot volunteers, coaches, team moms, you name it, she’s let them know how she felt they were doing their jobs. Which, in her opinion, was never good enough. We are not fast enough (god forbid she has to stand in a line for anything more than 15 mins), don’t communicate well enough (never mind how many damn emails are sent), & don’t schedule events/games in advance enough for her (because we are apparently in control of ALL situations all the time). And she will tell us about all our flaws – in the bitchiest way possible. In a classic example of perhaps you could catch more flies with honey moment – she sent an email last year that pissed off literally every single board member, including me who was trying  very hard to make allowances for her since I knew her the best off the field and, well, I just couldn’t. Her request was not outlandish by any means, in fact, a much more politely worded one dripping with a little honey would have gotten exactly what she wanted instantly. Instead, she had to squirm a bit and frankly she deserved it.

Ah, it’s a shame because I’ve seen her brighter sides and I want to say, oh, she’s just having a bad day & be loyal and make excuses & defend her, but…nope – she’s just a bitch. Has earned that label all on her own, time after time, year after year.

Man, I feel sorry for her husband!

One thought on “What part of all-volunteer board do you not understand?”