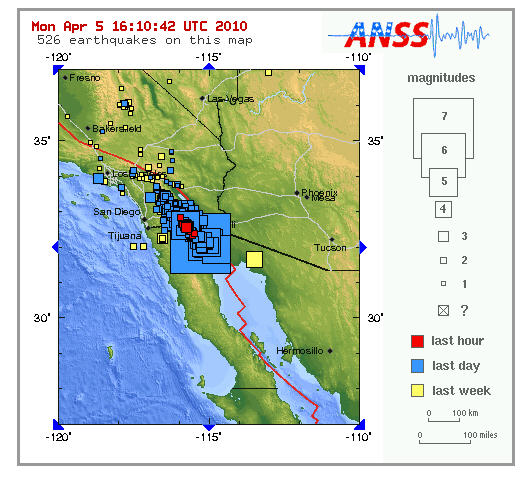 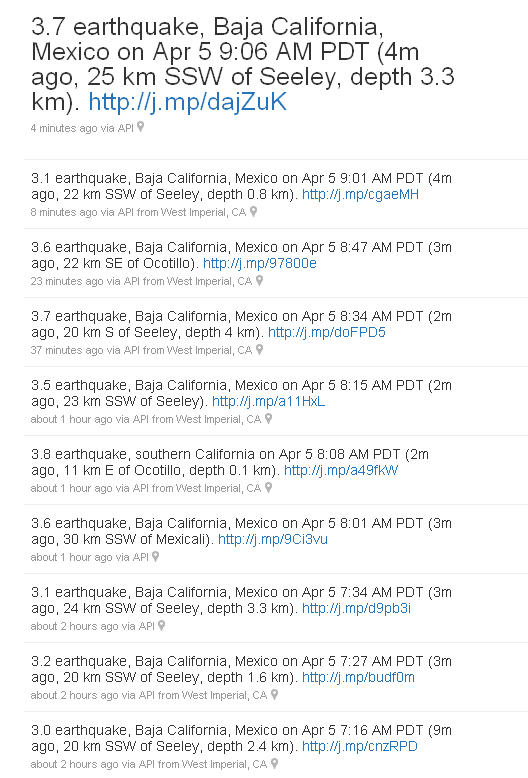 Look at all those aftershocks on that list! 10 in a two hour time span.

In case you missed it there was a wee bit of a shaker on Easter Sunday. Upon looking up this particular link at the USGS site you can see that the region where it hit had been rattling along for quite a bit even before the 7.2 one hit. After wards they have been coming fast and furious and not necessarily always along that same fault line since one shift in the earth can rub off (hah – get it?!) on another one pretty quickly.

After spending the day doing the usual Sunday chores along with a few more to prepare for Easter dinner at my house later on the evening, the boys and I had settled in our respective corners for a little pre-dinner relaxing. DS2 was upstairs in his room messing around on his laptop. DS1 was in his room sitting at this computer desk. The cats were in their late afternoon deep sleep spots, Chip on the floral chair and Amber on the back of the sofa. I was sitting on the sofa watching my DVR of Grey’s Anatomy.

Since the TV is on the wall next to where Chip was sleeping, I could see him out of the corner of my eye and he lifted his head as if something in the yard had caught his eye. I thought nothing of it since the birds around the feeder often catch their attention like that. Then I felt the sofa shake a little. Just as if someone had bumped into it. That was wave #1. I kind of wondered “is it??” but wasn’t yet sure. Then I felt something stronger and knew it was for sure a shaker. I paused the DVR (can’t possibly miss any of the show could I?!) and looked at the cats who were awake, but otherwise quite unruffled. I called out “earthquake!” to the boys just as DS1 started shouting the same.

Wave #2 passed which I gauged as a moderate shake nothing to worry about but, then wave #3 came rolling in and shook enough to make me stand up now and look around to see where everyone *should* be to be safe. The boys ran out of their rooms which was certainly the wrong thing to do since their doorways were the best place to be. DS1 is now shouting louder “yeah, yeah, shake it baby! C’mon! More!” and I was not pleased. While I was glad the boys were with me and I could see them (and the cats), I had not been through a quake in that house and I had no idea how it would react. DS1’s shouting got on my nerves as it was distracting me so I yelled at him to shut up and continued sweeping my eyes around the walls and ceilings of the house.

Wave #3 turns into Wave #4 and now I’m saying “Ok, this is a BIG one” and I see all the light fixtures are swaying pretty strongly and the mirror on the wall above the sofa (Amber still sprawled out on top of it!) is moving a little but not enough to scare me. I quickly turn to the wall mounted TV and notice it is not budging (good!). DS2 from upstairs says “Whoa, I’m going in a different direction from you guys!” because we were all clearly moving in a sideways shaking motion. DS1 said his chair had started rolling on its own in his room before he ran out. Because we were all doing a bit of shouting (about the quake and at each other!) I had no sense of any sound accompanying the shaking. Sometimes quakes are noisy. You can really *hear* them. But I don’t think this one had any noise. Other than a small creak in the house with that first shake it was quiet.

There was one more small wave after the big one and then it stopped. We quietly watched the lights keep swaying. I thanked myself for hating clutter and literally having almost nothing up on the walls that *could* fall and break or hurt someone. DS1 ran back into his room to check his TV on it’s stand (no movement) and DS2 came downstairs to hop on the laptop and get details. Amber put her head back down and resumed snoring 🙂

And THEN I remembered “Twitter!!” My phone had been charging on a side table so I completely forgot to tweet or take video during the shaking – I am a social media failure.

Overall that was easily the *longest* quake I’ve felt. It’s hardest wave was in the top 3 of intensity – I still think the initial jolt of the 1971? quake which I remember as a child was hardest. I was in my bed and it was like someone had lifted it up and dropped it down and slammed it against the wall – I remember the headboard hitting it. Then the more recent quake in 1992 in the Pasadena area also had an initial jolt that was pretty rough. Those were JOLTS though, short & powerful with small waves after but not much more. This crescendo of shakes was a little more unnerving since they kept building and building and you didn’t know which one was the last.

Overall though – after now seeing that the house is pretty well equipped for a shake and now that it’s over, I agree with the boys that it was fun 🙂

I am somewhat disappointed in my cats – I thought animals were supposed to have some sort of instinct about these things? Sheesh! Not mine! Probably woulda slept right through it if we hadn’t started yelling! In fact, they did totally sleep through a few aftershocks that I felt.

And that was the excitement of our Easter – how was yours?