First of all, here’s the only picture I have of Christmas Eve or Christmas Day since my photographer boyfriend couldn’t be there due to a sick doggie and the rest of us fail completely at taking pictures (suffice it to say, we all had a lovely day together)

A dark iphone selfie of me and the boys on the night of the 24th as we settled in to watch a Grinch marathon (original cartoon and then the Jim Carrey movie).

Anyhow – I ran on 4 miles as planned on the 24th, but never did run on the 25th. I was supposed to run 3 miles and then 2 on the 26th so instead I ran 2.7 on Thursday – a good compromise and also a good experience about running in really dry, Santa Ana conditions because I could FEEL the dry air in my nose & throat. It’s supposed to be better on Sunday, but still quite clear and warm in the sun. Just an unseasonably beautiful, hot December this year which is awful for the plants but rather nice for early morning long runs!

But I figured out that I better be well prepared as far as hydration for sure so I stocked up for the rest of the weekend (both pre and post race) and made sure I have enough extra calories to consume along with the liquid the race organizers will provide nearly every mile or 2:

Then, I also need to do some maintenance on my toes to continue to guard against hot spots and blisters (which have been blissfully minimal this time around as I trained since I have been diligently keeping up the grooming) 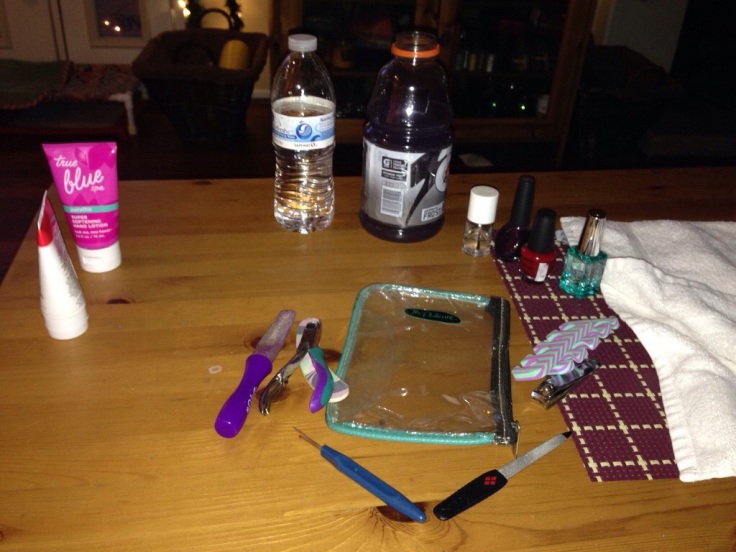 I’ve had to run around a bit since the 25th too. We had to get 17’s right thumb checked out – he fell on it in football practice back in October and unlike his left thumb which also was jammed, the right one never totally stopped hurting especially when he has to hold a pen to write so we were off to the orthopedist (same one who fixed his knee) yesterday and then getting an MRI done today. Well, actually, TWO MRI trips since they apparently didn’t get a complete view the first time. Basically 10-3 was taken up with driving to and from and sitting around getting the scans done. So I wasn’t really on my feet thankfully! Anyway, he has a bone spur that was pulled out of place by a ligament that over-extended and the MRI will reveal whether anything is keeping the ligament and bone from properly re-attaching eventually. If not – it is back into surgery for the boy! Weeeeeeee.

Tomorrow I pick up my race packet and THEN the countdown officially begins! I can tell you though, I will be VERY ready for a nice long run on Sunday. It will just a little weird to have a few hundred other people running with me 🙂