As I type this, SportsBoy is enjoying his Christmas gift from his dad – they are at the AC/DC concert in LA tonight! It’s his first rock concert and of course it HAD to be that band since his dad and I have been poisoning him with their music for a very long time 🙂 I am so so thrilled for him and not more than a little jealous! I’ve never seen them! And darn it but they are totally dissing San Diego as many bands used to do. Guess they didn’t get the memo that we are more than that sleepy little town south of the Dolly Parton Memorial and The Big Military Base and we actually have some really aweseom concert venues now. Oh well.

Thinking of him at his first concery though, brought a flood of memories of bands I went to see as a teen. I wrote about the first band I saw when I had the chance to see them again earlier this year. Styx may have been the first, but they were not #1 in my life back then. No, that honor belonged to this band as you can tell by my record collection: 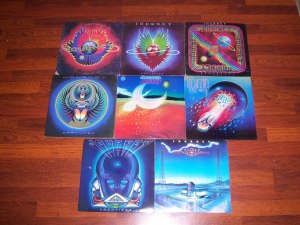 A history of Journey. 1979-1986 top to bottom. The center one was a Japan only release and is mostly instrumental. My favorite ablum covers were always the top right (Departure) and then the bottom left (Frontiers).  Just seeing those images brings me back! FDF (Formerly Dead Friend), was also a huge Journey fan and it became our goal to see them in concert the first chance we got. Oh wait, before I launch into the story, you gotta see the backs of these album covers:

Look at those outfits and that hair!! Particularly in that top right one – those are the 1980 version of glamour shots!!! Sepia tones and softened edges…scary!!

OK, so the summer of 1983 Journey tours to support Frontiers. At first they pull an AC/DC and ignore San Diego. That was much more common back then though so we were prepared and FDF used a contact she had at a ticket agency to get us floor seats at The Forum for $90 each (ironically where SB is right now though not anywhere near the floor  and they paid they MORE  for their tickets – *inflation!*) I was working at the San Diego Wild Animal Park that summer in one of their cafetria restaurants and saved all of that minimum wage salary for the concert. And then..we lucked out! Journey realized that there were fans in San Diego and added a date at the Sports Arena. For the same price we exchanged the LA tickets for the local ones and wound up 5th row center section on the floor. Oh yeah baby!! We were so excited. Bryan Adams was the opening act and we were looking forward to singing along to some “Summer of ’69” with him. FDF had the tickets. She drove to my house and then I drove from there since she was saddled with her mom’s diesel Mercedes. Yeah, we snubbed a butter creme Mercedes for a ’78 gun metal gray Toyota Corolla because..you know..*speed*. Kids! The Sports Arena was about 20 miles away from my house and we left in plenty of time to get there for the opening act. Of course there was bumper to bumper traffic at the off ramp. Pretty slow moving too. We didn’t care though. We had a blast laughing in the car and singing to the songs playing on my cassette in the car. Then we started to pay attention to other people in the traffic – all bound for the same place as us for the most part and started the time honored tradition of trashing other people 😉 Hey we, were bored. We were rewarded with a guy all of a sudden getting out of his car and running into the center median of the landscaping on the offramp to relieve himself – not necessarily all that well camoflouged! Oh, we laughed so hard that we nearly peed ourselves in my car. Sometime just after that laughing spell though, FDF went into her purse for her lipstick, rooted around a bit, then got super quiet. Deathly quiet. Then she looked at me with those enormous blue eyes of hers as wide as they could be and said:

“You have the tickets, right?!”

We both madly dumped out our purses to no avail of course. Then she got quiet again and remembered where they were. In the glove box of the car we left at my parent’s house.

Let’s not discuss the speeding laws I broke when we finally picked our way out of the traffic jam. Suffice it to say we were very glad we had chosen the speedier car! We screeched to a halt alongside her car, she retrieved the tickets, safely tucked away in that glove box and then flew back to the traffic jam. Somehow, we willed the cars to move along fast enough that we were literally racing down the aisle to get to our seats as the lights went out and Journey took the stage. The opening guitar strains of Don’t Stop Believing started playing and then the lights came on and we were in our own version of heaven.

Which had been preceeded by our own version of hell.

Life was a lot simpler then, wasn’t it? 😉

3 thoughts on “Concert memories – You have the tickets, right?”